We've all seen it in our kids. That hockey player mentality. That tough, never-give-up attitude...always wanting to get back in the game no matter what. Chances are you can relate to what local hockey parent Steve Speelman said to the producers of the Animal Planet show, "Monsters Inside Me, " during an interview about his son's mysterious and life threatening illness. Here's a preview of their story, scheduled to air June 23rd at 10:00pm. We are so grateful for how it all turned out. So very grateful.


http://press.discovery.com/ekits/monsters-inside-me-2/
Posted by Syracuse Hockey Mom's Network at 4:49 AM No comments:

When my son moved up to the Pee Wee level and the checking began, I recall watch 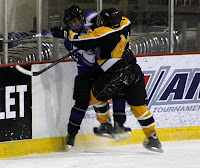 ing some games with my eyes wide shut. You see it coming. Whack! You get scared. You stop breathing. You clench your fists or squeeze the blood out of the arm that's closest to you. Checking is a part of the game that I honestly don't think I'll ever get used to (or like), especially when it's my kid on the receiving end of a nasty or illegal body check.

One of my many, ' I've stopped breathing' moments. My son is in the white jersey...

Even though our youth hockey players aren't allowed to start checking in hockey until they reach the Pee Wee age, that doesn't mean they know how to deliver a check that won't hurt them or the other player. As certified USA hockey coach Frank Colabufo explains in this video, it's critical that our kids learn how to check the right way and learn how to take a check as well. Here's a beginning lesson, but there is so much more ground to cover here, especially with our teen boys who think the are invincible on the ice.


Posted by Syracuse Hockey Mom's Network at 8:50 AM No comments:

The Captain&#8217;s Thoughts on Checking in Youth Hockey and the Importance of Properly Worn Chinstraps
Posted by Syracuse Hockey Mom's Network at 6:48 AM No comments: 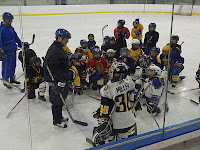 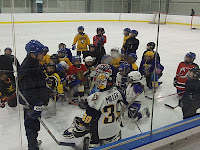 Coach Frank Colabufo, a certified coach for USA hockey, is the head coach for the number one high school hockey team in the state, the West Genesee Wildcats. He's running camps and clinics this summer at the Skaneateles Rink.

Here's your four minute drill kids. Grab your stick, a weighted ball and head to the driveway. Coach Colabufo says this exercise will help young hockey players develop good stick handling skills. Plus, it's fun! (that's always a plus)

Posted by Syracuse Hockey Mom's Network at 5:40 AM 1 comment: