Branching Out will Help the Roots of Development

When the hockey season ends, my daughter is ready to lace up her cleats and stick handle a lacrosse ball. But I wonder: Should she stick to one stick? Other team parents fill their children’s summers with clinics and hockey leagues. Am I holding my daughter back? Will her teammates improve more than she does by next season?


Kevin Duy, creator of SportsDadHub.com says that’s nonsense. “I feel that every sport has a season for a reason. The time spent away from playing an organized sport gives them a chance to miss it. By the time their next season comes around, they can’t wait to start going to practices and playing games again. It renews their passion and excitement for each sport.”

Oswego, N.Y. native, phys ed teacher and longtime coach Kevin Ahern says a parent should never underestimate the importance of a child playing several sports. “I can remember not thinking about hockey in the off months, but then getting that refreshed, burning desire to get back on the ice that all truly passionate athletes need.”

Young athletes not only risk mental burnout, but also physical blowout. Duy’s research finds that the repetitive stress on joints and muscles can be eased. “By playing different sports, they’re building and strengthening multiple muscle groups that will eventually help them in every sport as they get older and stronger,” he says.

Lee Meagher Lewis agrees. Her son started skating at age four and plays for the South Shore Kings, a mite elite team in Foxboro, MA. But he also enjoys baseball, lacrosse and swimming. “I want my son to be well-rounded and not feel like he missed out on other sports,” Lewis says. “It’s critical to his developing body to develop muscles other than hockey muscles. It’s important for his social development and confidence.”

Lysander, N.Y. hockey coach Mark Benedetto also changed his thinking with his boys. “The fun was leaving them. We put the boys in swimming, lacrosse, fitness training and golf with less time at the rink. We have seen a big difference in their development both physically and mentally. I am a believer now.”

“As long as they are active, doing something that puts a smile on their face, as a coach I am happy,” says Ahern.


So let them play soccer, swim, throw a ball around or, like my daughter Sophia, run on a lacrosse field and be happy, too.
Posted by Syracuse Hockey Mom's Network at 6:15 PM No comments:


Blankets, body heat and a freshly brewed cup of Tim Hortons coffee helped us wake up and warm up for those early morning games in frigid rinks during the long, cold hockey season. Now that we've packed up our blankets, pocket warmers and gloves, it's time chill out this summer!  To help kick off a sizzling season, Tim Hortons is providing a Summer Fun Prize Pack for one lucky fan of The Puck Hog series.

So how is your hockey family chilling out this summer? Post a photo or tell us right here on The Syracuse Hockey Moms Network blog or The Puck Hog Facebook Fan page and you'll be automatically entered in the drawing for a chance to win a really cool prize from Tim Hortons! The prize pack includes; 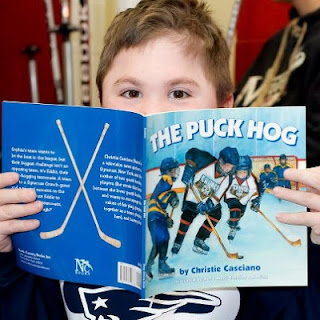 Posted by Syracuse Hockey Mom's Network at 6:04 PM No comments: