We had a terrific time this weekend in Oswego at the NHL Exhibition Game.  A great game, and quite the show from Stanley Cup Champ, Erik Cole and Fulton native Rob Schremp.  Here are some highlights of our tour of the Hockey Hall of Fame Exhibit.  Enjoy! 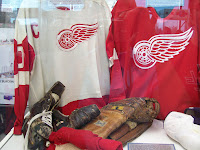 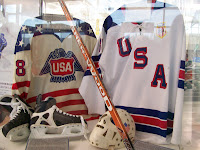 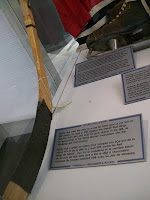 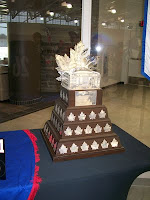 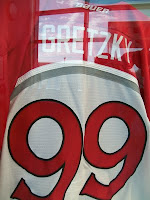 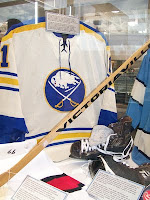 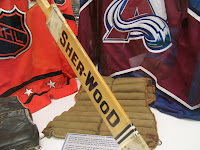 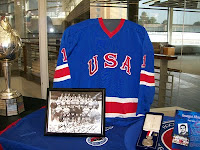 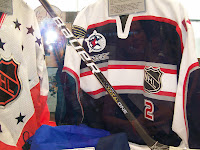 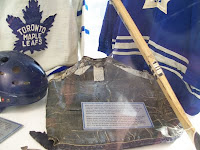 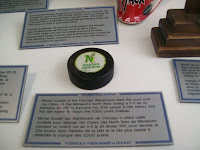 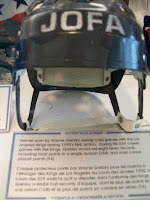 Posted by Syracuse Hockey Mom's Network at 9:12 AM No comments:

OSWEGO, New York (July 20, 2011) – Hockey enthusiasts will get a chance to see Oswego-native Erik Cole and other NHL and former Oswego State Laker hockey players up close and on the ice Saturday, July 23rd at 7 p.m. at the SUNY Oswego Campus Center Ice Arena.
Cole, a Stanley Cup Champion, U.S. Olympian and forward with the NHL Montreal Canadiens, will join former teammates Joe Corvo and Justin Peters, as well as Fulton-native Rob Schremp on the ice to showcase their hockey skills. Former Oswego State Laker Hockey Players Kyle McCutcheon, Brendan McLaughlin, Stephen Mallaro, Kyle Gunn-Taylor, Owen Kelly, and Matt Vashaw, as well as Dream Big Director Kevin Caraccioli and Bauer Hockey representative Tim Parr are also slated to participate.
The NHL Exhibition Game is part of the Erik Cole Dream Big Foundation Golf and Hockey Classic slated for this upcoming weekend in Oswego.
The Erik Cole Dream Big Foundation was established in 2007 by Cole to support youth hockey programs, as well as children who are suffering from cancer and other diseases.
Admission is a donation of $5.00 per person for adults and children are free. A commemorative Dream Big wrist band will be provided upon entrance, and the admission price includes the NHL Player Exhibition game, Hockey Hall of Fame Exhibit, and The Zambonis concert, as well as a chance to win a game worn 2011 Erik Cole Dream Big Foundation NHL Player Autographed Jersey.
“What an incredible weekend we have scheduled at the Campus Center Ice Arena,” said Kevin Caraccioli, Erik Cole Dream Big Foundation Golf and Hockey Classic Event Organizer. “Not every day do you get to see Erik and other NHL players skate in person. Well here is a great chance to see them, the Hockey Hall of Fame, the Zambonis and some great youth hockey players!”
According to Caraccioli, Erik Cole Dream Big Foundation merchandise will also be available for purchase, and concessions stands will be open on Saturday and Sunday at the Campus Center. The Hockey Hall of Fame Exhibit will be available from 9 a.m. to 7 p.m., and the Zambonis will be in concert during the NHL Exhibition Game starting at 7 p.m.
“We really wanted to provide the kids and their families with an ‘all things hockey’ experience over the weekend,” said Cole. “And, I think we really accomplished that this year.
“We welcome the community to come out to the Campus Center Ice Arena and support the Dream Big Foundation,” he added.

ERIK COLE
Erik Cole is a native of Oswego, New York and current forward with the Montreal Canadiens of the National Hockey League (NHL). He is in his tenth NHL season and first with Montreal. Cole was selected by the Carolina Hurricanes as the 71st overall pick in the third round of the 1998 NHL Entry. Prior to joining the Hurricanes, Cole played for Clarkson University and the Cincinnati Cyclones of the IHL. After six years in Carolina, he was traded to Edmonton in July 2008, but re-acquired by Carolina in March 2009 as part of a three-team trade. Cole signed a two-year contract with the Hurricanes in July 2009, and just this past month a 4-year contract with the Canadiens. Cole was a member of the 2006 Stanley Cup Champion Carolina Hurricanes and represented the United States at the 2006 Winter Olympics and the 2005 and 2007 IIHF World Championships. Cole has played in 620 career NHL games and has 184 goals and 206 points during that tenure.
Erik Cole Fast Fact: Erik’s first youth hockey team was the Oswego Sub Shop.

JOE CORVO
Joe Corvo was born in Oak Park, Illinois and was recently acquired by the Boston Bruins. He is in his ninth NHL season and first with Boston. Corvo, a defenseman, began his career in Los Angeles after being drafted by the LA Kings in the fourth-round draft pick (83rd overall) of the 1997 NHL Entry Draft. After two years with the Kings, Corvo signed a four-year contract with the Ottawa Senators, before being traded in 2008 to the Carolina Hurricanes. While playing for the Hurricanes Corvo became the third defensemen in Hartford Whalers/Carolina franchise history to record a hat trick. After a brief stint with the Washington Capitols in 2010, Corvo returned to Carolina this past year, before being traded this past month to the Bruins. Corvo has played in 568 career NHL games and has 79 goals and 179 assists.

Joe Corvo Fast Fact: Joe was an outstanding baseball player and attended pro camps with the Chicago Cubs at Wrigley Field and the Chicago White Sox at Comiskey Park.
ROB SCHREMP
Rob Schremp is a native of Fulton, New York and played this past season for the Atlanta Thrashers (now known as the Winnipeg Jets) and New York Islanders. Schremp grew up in New York and then took his hockey career to Canada. He spent his major junior years in the Ontario Hockey League and then spent his rookie career as a Mississauga Ice Dog. After scoring 26 goals and 74 points, Schremp was named OHL Rookie of the Year in 2003. After a few games in the 2003-2004 season, Schremp became a London Knight and led them to their only Memorial Cup. In 2004 he was a first round pick (25th overall) in the NHL Entry Draft to the Edmonton Oilers. Schremp made his NHL debut during the 2006-07 season against the Minnesota Wild. After playing primarily with the Springfield Falcons during the 2007 and 2008 seasons, he was claimed by the Islanders. Schremp had 10 goals and 12 assists in 45 games this past year before being acquired by Atlanta. Schremp has played in 114 career NHL games and has 20 goals and 34 assists.

Rob Schremp Fast Fact: Schremp scored what was nominated as the “Goal of the Year” in the NHL on January 6, 2010 at Colorado, when he caught a puck, released it from his glove and batted it out of mid-air over Avalanche goalie Craig Anderson.
JUSTIN PETERS
Justin Peters is a native of Blyth, Ontario, Canada and is currently a goalie in the Carolina Hurricane organization. He just completed his second season as the back up goalie to Cam Ward in Carolina. A 2004 Second Round Draft Pick (38th overall) by the Hurricanes, Peters first played in the Ontario Hockey League with the Toronto St. Michael’s Majors and the Plymouth Whalers. After being drafted in 2004, he started his professional career in 2006 with the Hurricanes’ AHL affiliate, the Albany River Rats, and their ECHL partner Florida Everblades. In 2010, Carolina called up Peters from the River Rats and Peters made his NHL goalie debut against the New York Islanders with a 3-1 win and 34 saves. Peters has played in 21 career NHL games with nine wins and 584 saves.

“Do YOU have a
HOCKEY TREASURE
or COLLECTION?”
Hockey Hall of Fame staff will be at the Erik Cole Dream Big Event this weekend at Oswego Campus Center Ice with a display that showcases the history of the game.
We are the official caretakers of hockey’s history –
all leagues, all levels, worldwide!
One of the HHOF staff can speak with you about the opportunity to preserve and share something from your hometown or your favourite team with the hockey world.

We encourage you to make a donation today that can help us showcase the stories about the players, teams and leagues for all hockey enthusiasts tomorrow.


Help us preserve the history of the game together!
For more information please visit our Curatorial Staff at the SUNY Oswego Campus Center or contact:

So now it's Crunch time for me!  Okay, so it looks easy from where I sit and yes, I'm one of those annoying "experts" who yells from the stands telling my kids when to shoot, when to pass, when to skate!  The tables are about to be turned.  I think I must have lost my mind.   I've actually accepted an invitation to play in the Celebrity Street Crunch Game at Alliance Bank Stadium - Date: Saturday, July 23rd @ 10:30 a.m.  So, if you're looking for some entertainment, ( I promise I can provide that!), please join us.  I'll be looking for top shelf, where grandma keeps the cookies, running with my elbows high,  while hearing  my children in the stands,  probably yelling...come on mom...DROP THE GLOVES! Did I mention this will be my first EVER hockey game?  Stay tuned.
FYI- -- Kids game starts @ 9 a.m.
- Celebrity game will feature members of the media pitted against one another in a street hockey game

Posted by Syracuse Hockey Mom's Network at 3:14 PM No comments: