Posted by Syracuse Hockey Mom's Network at 4:00 PM No comments:

Dear Christie,
Thank you for coming to our school. I have always wanted to be an author and an illustrator. I write some of my own books and I was so happy to have an actual
author come to East Hill and I am also glad that you mentioned there was going to be a Puck Hog 2! I can't wait to read it! I love to read too!! I hope I am as good of an author as you someday!
Maison
4th grade

Hi Maison,
You are well on your way to becoming a terrific writer and illustrator! I am so impressed with your talents. I look forward to the day you will be autographing a book for me. Keep writing!
Best wishes,
Christie

Posted by Syracuse Hockey Mom's Network at 5:15 PM No comments:

After the season we look forward to leaving the hockey mom vans and SUVs in the driveway for a limo ride to wine country for a day of sampling and unwinding. The hockey mom crew was a little smaller than past years. Guess we had a lot of conflicts with schedules. It may have been a smaller crowd, but the conversation topics were just as plentiful and diverse as the journeys in which we filled a whole bus.
As we piled into the limo, our noses kicked into high sensitivity mode. We all detected it right off the bat Okay, so we're all used to that horrific
stench of our sons moldy hockey bags, but this odor was one that was even harder to stomach, if you can believe that. Somehow you can tolerate a foul odor when it's your own kids, but when it's someone else's, it's not acceptable. Anne pinned it first "It smells like someone got sick last night in this limo." Eeeew!! There was no way we were riding all the way to wine country and sharing our air with the stench of puke. Hockey moms to the rescue. "Hang on girls," Lynn chimed in, " I still got it."
We immediately knew what she was referring to. We were relieved. End of the hockey season, chances are you're out of the must have spray to zap hockey induced odors from your car, making those long tournament treks a lttle easier on the lungs. Lynn saved us. We sprayed the heck out of that limo and with a little mimosa to boot, our ride to wine country was as smooth as a sheet of freshly cut ice! Cheers !
- Posted using BlogPress
from my iPhone

Posted by Syracuse Hockey Mom's Network at 2:19 AM No comments: 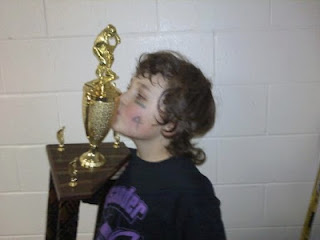 A few reflections as I look back at the past season and look ahead to signing up for a new one.  I expect to see the sign up for the new season e-mail to land in the inbox soon. Before we move up and on, a look back.  The end of my daughter's year as a Squirt could not have had a better ending.  Back to back tournament wins, champions of their Snowbelt Division and crowed champs at the Pepsi Tournament in Buffalo.  Sweet? Absolutely!  Expected?  Absolutely not!
During the season, the only thing consistent about our kids was their inconsistency. There were some occasional moments during games where they showed some real hunger for the puck and looked like a sharp little team. Wow, we thought, maybe.....but the next game we found ourselves shaking our heads, well, maybe not.  We witnessed loss after loss after loss. Last place in the league.

As we neared the end of the season, we had tempered our expectations and all decided, hey if the kids walk away from the tournament with a win or two, we'll all be happy.  We'll all be proud.  We had fun after all.  That's what it's about anyway.  As long as they try hard and do their best, right?
Well, those little stinkers finally showed up, as a team, for every single tournament game. Passing, listening, focusing...scoring!  Scoring???!!!  Wow.  As we sat around the hotel pool trying to analyze  our kids tournament performances, one parent said what we were all thinking.  So, when did the aliens visit our hotel rooms and abduct our children?  The same question could have fairly been asked about the parents.  In the stands the routine shouts of  "Pass the puck!  Skate! Move!  Go after the puck! Attack! Cover the puck!   Come on defense, wake up!!" were replaced by "Nice pass! Nice Save! Good hustle! "  Good hustle?  You're talking about our kids?  Are these the same parents? 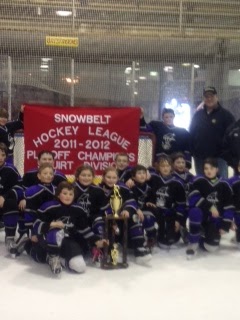 We talked about our kids' transformation at our end of the season party.  As we watched them wildly gobble up handfuls of team colored M&M's and compete in a cannonball splash challenge in the hotel swimming pool, the table with the trophies  got plenty of stares in disbelief.  There they were.  Three huge tournament trophies next to the cake and pizza, side by side, a document of what our kids were all capable of achieving.  When they tried.
Eventually parent conversations revolved around the end of the season shockers. So, what did we conclude?  " Tournament kids." Yup.  If there was a trophy and a title up or grabs, they would show up.  Pressure plus prize equals perfect performance.  Stinkers!  Can we have a season redo? 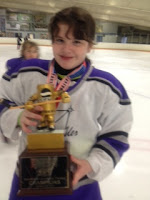 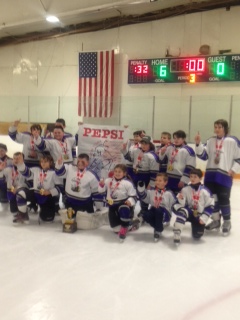 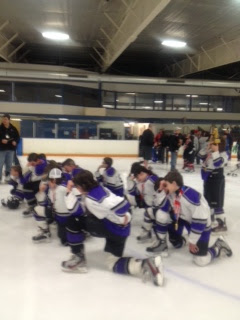 And a lesson for next season.  Don't get discouraged by those back to back season game losses.  In the end, they just may surprise you!
Posted by Syracuse Hockey Mom's Network at 6:38 AM No comments:

Why a Hockey Mom Lost Her Cool

.........Hockey Mom Reveals Why She Stormed the Ice Mid-Fight

As Gina O'Toole sat in the stands watching a fight break out among players in her teenage son's hockey game and seeing the referees do nothing, the Boston-area mom says she knew she had to do something.

She also knew she had to take her pocketbook with her.

"What was I supposed to do with it, throw it into the stands and say, 'Hey, could you hold this? I have to break up a hockey fight?'" O'Toole said today on " Good Morning America" of the white purse she never let go of while storming the ice and yelling at the refs to break up the fight.
That purse and O'Toole's dramatic step to break up the fight between players of the Boston Raptors and the Connecticut Tribe - two teams representing Boston youth summer programs - made her a hero among moms when video of the incident was posted on YouTube.
O''Toole's identity had remained a mystery until today when she appeared on "GMA" to explain why she took action.

"I've seen fights usually between one or two children and the refs usually step in immediately and break it up. That didn't happen," she said. "I just found myself opening the gate and walking onto the ice and saying, 'Hey, you need to get control of this game. What are you doing?'"

"The ref turned around and he yelled at me and told me to get off the ice and I said, 'You need to do your job,'" she said. "What concerned me was the feeling of the blows to the back of the head and a child going down the ice of maybe a potential head injury."

Media reports at the time described an atmosphere of chaos in the stands as some of O'Toole's fellow spectators yelled at her to stop the fight and others screamed at her to get off the ice.

O'Toole says they were just looking out for her safety.


"I was told that people were more afraid of me falling and injuring myself," she said. "A lot of the people that were there were feeling the same feelings that I was feeling, that, 'What is going on? This is insane. It's gone on too long. Why aren't the referees stepping in?'"


Despite her non-threatening white purse and the bright pink jacket she was wearing, O'Toole's admonition proved more threatening than the black-and-white striped referees. The fight quickly ended once she was out on the ice.

O'Toole says her son, Mark, 16, was initially embarrassed but later understood why his mom did what she did.


The fight-breaking, hockey-mom-gone-rogue, however, had to call it a day after her heroic efforts.

"He had a second game that evening," she said of her son Mark. "I called my husband to come down for that game. I went home."

Posted by Syracuse Hockey Mom's Network at 5:09 PM No comments:

Posted by Syracuse Hockey Mom's Network at 6:08 PM No comments: