Bullying at The Rink

While it may seem like a miracle that the Chicago Cubs finally won the World Series, it’s easy to forget – that was predicted years ago.
Not by Nostradamus, but in Back to the Future II.
In Marty McFly’s alternate universe, 2015 gives us things like the championship Cubs, self-lacing sneakers, and everybody’s favorite blockheaded bully, Biff Tannen.
Our actual 2016 now has two-outta-three (which we all know ain’t bad), but when it comes to actual bullies, kids don’t have the luxury of hoverboards or time travelling DeLorean’s. So what do you do when your child encounters bullying at the rink, or in the locker room?
You need to create an environment that makes it difficult for such practices to survive. For Westchester County Physical Education Teacher and Youth Hockey Coach Stacey Wierhl that means setting clear standards and expectations for the team that promotes the team first. “The coach is responsible for creating a team atmosphere that is about caring for one another. When each player thinks of their teammates first, the coach has done a great job to combat any potential bullying,” says Wierhl.

Supervision is key.  “The coach needs to be vigilant before and after games and practices. Coaches need to be aware of what kids are saying in lines and on the bench,"  Wierhl adds. “Coaches most certainly need to be present and involved whenever the team is together.”
Wierhl also advises coaches to be that someone that every player feels comfortable approaching. “If a player hears or witnesses something that made them uncomfortable, the player must have a sense of trust and comfort in the coach to be able to openly share his or her concerns.”

Bullying in athletics is real, and occurs across all general lines, at all levels. And when addressed, it can quickly cause its victims to loathe not just the harassment, but the sport itself.
If you, your coaches, and other team members have empowered kids, then it’s easy for them to apply some of Biff Tannen’s own wisdom to bullying – tell it to make like a tree, and get out of here.
Posted by Syracuse Hockey Mom's Network at 6:01 PM No comments: 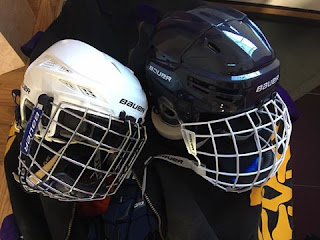 I'm going to miss that white helmet. She's worn white since mites.This week my hockey girl is strapping on a navy blue one, as she begins playing for a Varsity High School Hockey team. I found out after a post on Facebook, I'm not the only one with a silly attachment to a helmet color. A number of parents chimed in when I shared my melancholy feelings. "Noah switched from a royal blue helmet he's been wearing since he started mites to a navy blue one," wrote one Facebook friend, "It took us about a month and a half to figure out who he was on the ice."

When your kid is the same size and shape as ten others on the team, having a unique helmet can be a plus,  "My oldest always wore a red helmet. My parents and I loved it because we always knew which player was on the ice with a quick glance. When people would ask which one was my son, it's a simple reply, red helmet," wrote another parent.

But it's more than the plus of the quick recognition factor, that's stirred my emotions and why I'm having such a tough time with the retirement of the white helmet. 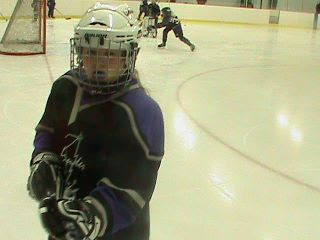 Sophia picking white over yellow, black, navy blue or red had a lot to do with a gifted 13 year old hockey player, who was the playmaker on her big brother's team. He always took the time to pat her on the head as they lined up to take the ice, ask her how her game was and did she score. He never treated her like the annoying little brother and sister who runs rampant around the arena with all the other rink rats, stuffing wayward pucks into their pockets.. She was Joey's little sister, and he always made her feel like an important part of the team. Their little mascot.
This teen who won my little girl's admiration was fast and furious on the ice, with strength beyond his years. His reputation spread and rival teams always knew to try and shut down the kid in the white helmet.  Beyond his talent, he was a class act. Never vindictive, always providing inspiration to teammates with less talent, and helping them play up.

I'll always remember when he got the puck to my boy, who hadn't yet scored in a game, and then celebrating like he was the one who made the goal.  A phenonmenal football player, there were times when I think he had a hard time switching off that defensive tackle mode as he went from cleats to blades. The game he inadvertantly flattened an opponent as he was flying across the ice, then stopped to help that player up, was the day my girl begged to wear a white helmet. How could I say no?

She's worn one ever since. I can't help but think those early impressions of her hero in the white helmet, has a little something to do with the development of the passion, and drive that I see every time she steps out onto the ice, her desire to keep things calm when tempers flare and the respect she has for the letter "C" she wore on her jersey.

She's stepping out onto the ice tonight for the first time in blue.  So while I may not be able to quickly recognize her by what she's wearing on her head,  I hope I will continue to tell her apart, by what she carries in her heart. 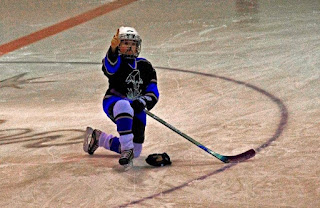 Posted by Syracuse Hockey Mom's Network at 4:57 PM No comments:

Hockey For The Holidays

Need a hand with your smelly hockey gear? The Pog passed The Puck Hog glove test (as well as pants, pads and bag) One lucky fan of The Puck Hog Facebook page will have a chance to win one!


One entry per family please. We will randomly draw a name on Monday November 7th (election eve;) and announce our winner on Tuesday November 8th. Cheers to a sweet smelling season! POG is on Facebook too #hockeygeardoesnthavetostink


Posted by Syracuse Hockey Mom's Network at 12:26 PM No comments: