The Puck Hog (5)
Posted by Syracuse Hockey Mom's Network at 6:27 AM No comments:

Posted by Syracuse Hockey Mom's Network at 5:26 PM No comments: 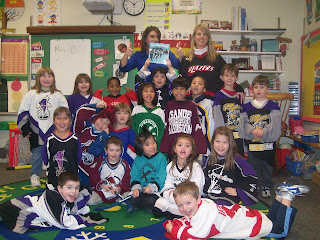 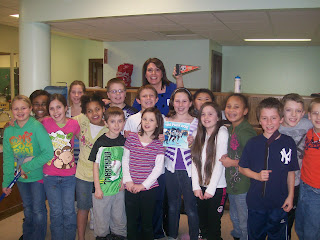 Posted by Syracuse Hockey Mom's Network at 3:10 AM No comments:

Reading Rocks with The Puck Hog!

Posted by Syracuse Hockey Mom's Network at 5:58 AM No comments:

The Puck Hog Theme is Teamwork!

Students from Reynold's Elementary give a thumbs up to The Puck Hog message about teamwork and having fun!

Posted by Syracuse Hockey Mom's Network at 5:10 AM No comments:

Posted by Syracuse Hockey Mom's Network at 2:57 AM No comments:

Staying true to the characters in the book, the team that inspired The Puck Hog
demonstrate the importance of passing and teamwork.
Posted by Syracuse Hockey Mom's Network at 2:54 PM No comments:

Was Syracuse Crunch defenseman Nathan Paetsch ever a puck hog?

Posted by Syracuse Hockey Mom's Network at 1:46 AM No comments:

A Modern Day Miracle On Ice 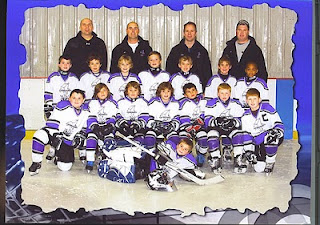 A Modern Day Miracle On Ice

Let me introduce myself...I'm the mom of the Lysander Lightning Mite A Goalie, Bradley O’Neill. I would like to share with you what any parent on the Mite A team is sure to describe as a pure MIRACLE ON ICE.

HOW IT ALL BEGAN

Some of you may be old enough to remember the original Miracle On Ice that happened so many years ago when a team of teenage college boys stole the hearts of the world on the road to an Olympic Gold Medal, when they defeated what seemed like an unbeatable Russian team. Fast forward to January 2011, Brockville, Canada…It all started this past Friday night when the Mite A team of the Lysander Lightning began their first Canadian tournament as the only American team that had entered. What I did not know was once our coaches found out we were playing against 23 Canadian teams in the higher division, they tried to drop us down to the next lower division so as not to overwhelm our boys and ensure they had a positive and fun experience. But, BOY OH BOY, did we underestimate our kids!

This team of all 8-year old boys was PUMPED to say the least! During the locker room pep talks, these young boys with such heart kept chanting “USA, USA, USA!” They began their first game with such energy that it turned many Canadian heads and made them stand up and pay attention to this team of strong contenders. The game was exciting; the boys played phenomenally, and won 4-0 (Zach Cole was MVP!). As is customary, my proud goalie son led the team in a traditional sportsman-like handshake with their opponent and he waited to step off the ice last. As he came off the ice, he excitedly declared, “Mom, that was my FIRST shutout!” While proud and chilled at the thought, this is not where the Miracle occurred.

Saturday morning came and we were to face a very strong Canadian team. The boys came out with the same exuberance and heart they had played with the night before. However, the outcome was not to offer the same results. The team was defeated 3-1, but they came off smiling and proud (Lucas Hoskin was MVP!). It was not until later that day that we all discovered these young 8-year old boys had advanced to the Gold Medal bracket of 8 teams (out of 24) and were to play at 8 a.m. the next morning against the hometown Brockville Braves. Knowing they could relax the rest of the day, we all enjoyed some swimming, knee hockey, and a bonding team/parent EARLY dinner with the goal of curfew by 8 p.m.!

Sunday morning came and this is where the Miracle began…

The boys knew that if they were able to win their morning game, they would advance to the semi-finals and play later that day. They were excited and full of so much energy. The music was rocking in the locker room! We all wished them luck and told them to have fun as us parents left the locker room to pace the bleachers of what was to be THE MOST exciting game we had EVER experienced!


Close your eyes with me and again remember these are 8-year old boys as I describe for you the Miracle of the next 1 ½ hours… The game began with a very quick goal by Lysander within the first 2 minutes of the game. Yes! The boys were pumped and had set the tone early on. However, very quickly, the Braves returned with a quick goal in a matter of minutes. Wow! The Lightning pushed on and used every skill they were taught to hang tough and play with skill, focus, and MOST of all heart. The first period ended 1-1. The second period was as exciting with both teams holding a tie at 2-2. As the 3rd period began, we all began pacing. With about 6 minutes left in the 3rd period, the Braves scored a second goal to put them ahead 3-2. Now, I must explain that our team has a nickname and they are “The Comeback Kids”! They have pulled off more come-from-behind ties or wins than our parental nerves can handle, and here we are…they are doing it to us again! With 2 minutes left in the game, our lovable and talented young boys persevere and pull off another goal tying the game 3-3. The parents are in awe and I have chewed off about every nail on both my hands! NO ONE is giving up! These boys skated harder in the last 2 minutes than they had the first 2 periods. The regulation clock ran out and we found ourselves in an odd predicament…. you can’t end a tournament game in a tie! Off we go to our first-ever 3-on-3 sudden death overtime! (Oh Yeah, did I mention these are 8-year old boys?) Overtime seems like it takes forever to endure, and NO ONE scored! Off we go to double 3-on-3 sudden death overtime, and I am feeling as if I am in my son’s heart imagining the pressure these boys are feeling. The second overtime runs down to about 30 second with a whistle. As I look at the clock, selfishly I think, “They are going into a shootout against my little boy! I can’t take this!” I pause to look at each player on the ice and our bench and think, “How do they have the energy to play with such dedication? Their legs must feel like rubber.” But, you could not tell from watching them. As the whistle blew, there was a breakaway with a sudden goal squeaking by my young son…game over 4-3. I cannot describe well enough what I saw…it was the life being sucked out of my son and these little guys in a matter of seconds, after playing the game of their lives! Bradley was showered with hugs by the best teammates anyone could ever ask for, and they quickly lined up for team handshakes and honors (though you could see the tears streaming from their faces). The parents were beyond proud of this strong TEAM of young boys who pulled off the most MIRACULOUS game (win or lose)! How many 8-year olds can say they played the Canadians and went into double sudden death overtime? I’d say we held our own pretty darn well! As the team lined up on the ice, honors were announced, and my young goalie son, who has a heart of gold, was selected as the MVP! OK, now I was crying (who wouldn’t be?)!
We were stopped numerous times on our way out of the arena by parents of the Braves and others that were watching…they couldn’t believe what they just watched. Many of the parents were still standing there with their jaws dropped open in amazement at what we had just observed. I still get chills just thinking about it. And this is where we heard parents saying, “I’d say that ranks right up there with, if not better than, the original Miracle On Ice!”
As we entered the locker room, you could see the heartache in these little boys eyes as they shed tears that would break anyone’s heart! Our coaches were phenomenal and praised EACH AND EVERY player on this team for their contributions and accomplishments in such a great game. We quickly dried their tears and whisked them back to the hotel. Within an hour they were eating breakfast, playing knee hockey and eating cookie cake…. did I mention they are 8-year old boys? 
I am sure they will soon forget the details of this Miracle game I have just described and will only remember what truly matters to 8-year old boys, which is playing with their friends, running around, and eating junk food! But for us hockey parents who melt at the accomplishments of our children, we will remember this weekend for a long time to come as a TRUE MIRACLE!
THANK YOU LYSANDER MITE As……YOU ROCK!
(And thank you Dawn.  I guess I should have issued a tissue-alert before I posted!)
Posted by Syracuse Hockey Mom's Network at 2:53 AM 1 comment:

Book Signing for The Puck Hog


Crunch Defenseman Nathan Paetsch and WSYR-TV News Anchor Christie Casciano will be there
January 07, 2011
The Syracuse Crunch announced that defenseman Nathan Paetsch and WSYR-TV news anchor Christie Casciano will be signing copies of Casciano's new book, "The Puck Hog," at Creekside Books in Skaneateles on Wednesday, Jan. 12 from 5 to 6 p.m. Creekside Books is located at 35 Fennell St. in Skaneateles. Please call (315) 685-0379 for directions.
"The Puck Hog" is a children's book featuring a fictional youth hockey team named the Crunch. The story focuses on Eddie, a puck-hogging teammate who only cares about his own stats. A team trip to a Syracuse Crunch game and a pivotal moment on the ice leads to kids learning about the importance of teamwork and unselfishness.
The Crunch continue their season-high seven-game road trip with a 7:05 p.m. match-up at Binghamton on Friday, Jan. 7 at the Broome County Veterans Memorial Arena. Syracuse returns home to The Oncenter War Memorial Arena on Jan.15 for a 7:30 p.m. contest vs. rival Rochester. Season and single-game tickets for the 2010-11 season are on sale and can be purchased by calling the Crunch office at 473- 4444, or by stopping by the Crunch office at The Oncenter War Memorial Arena, located at 800 South State Street in downtown Syracuse.
Posted by Syracuse Hockey Mom's Network at 6:23 AM No comments:

It's been lots of fun heading into classrooms with The Puck Hog to get kids excited about reading, writing and passing!  I always start off the presentation by asking, " Who plays hockey?"  I guess I need to stop being so surprised and disappointed when I see those blank stares on so many young faces.  By a show of hands, baseketball, soccer, softball, baseball and football keep winning the kids sports choice awards. With a captive audience before me, I can't help but take advantage of the opportunity to spread a little love and passion for this challenging sport.  Who knows?  Maybe we can get a few more kids hooked on the great sport of hockey. So, why not let them get a feel for the game?  Here's how the tape to tape challenge played out with students in Trumansburg .
.
Posted by Syracuse Hockey Mom's Network at 9:04 AM No comments: