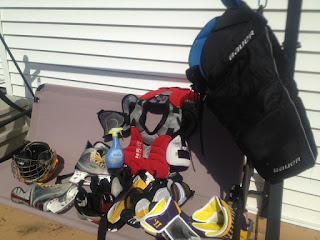 http://touchpointmedia.uberflip.com/i/916992-january-2018/11
Just like players, hockey parents must earn their stripes -- lugging around equipment, early ice times, holidays sacrificed for the sake of driving to and from tournaments. And just like players getting that first check of the season out of the way, parents must also dispense with some unpleasantries to earn their true badge of honor:

The olfactory equivalent to a Shea Weber slapshot, The Stink Monster resides in hockey bags and used equipment. Its stench lingers up and down the spine like a Dustin Byfuglien hit at center ice.

But just as some plucky kids in Lake Placid once took down the mighty USSR, so too can The Stink Monster be vanquished.

Suzanne Wolff-kozikoski has a nose that knows offensive odors, having spent more than 20 years as a nurse. But this hockey mom says she’s never encountered any stench funkier than a hockey bag. She cautions the need to tackle “hockey stink” beyond its unpleasantness to the nostrils -- odor-causing bacteria thrives in a warm, most environment, creating a risk for infection.

You’ve likely heard this piece of advice before, but it is truly the most effective defense: never let wet equipment sit in the bag.

It does nothing just to unzip the bag either. After every practice and game, gear needs to be taken out and sweaty clothes need to go in the wash.  At least once a month -- more if needed -- I’ll run pads through the washing machine, using white vinegar as fabric softener to neutralize the odor without adding a chemical coat to the gear.
I also designate a space in the house where the equipment can properly dry. A dehumidifier can help too. Some parents worry washers might affect the effectiveness of the protective gear and prefer a gentle soak in the tub with hot water with a dose of antibacterial soap. Some parents like the added boost of sprays and air dry the gear. On warm, sunny days, take advantage of Mother Nature and let the pads bake in the sun.
There are plenty of sprays, lotions and potions on the market, but the real key to slaying The Stink Monster, is staying ahead of the game and airing equipment after every use. Be diligent!

While I've got issues with this odorous opponent, there are plenty of players and parents, like Jennifer Hannon Powderly, who don’t view the stinky bag as a game misconduct. What’s it smell like to her? “Determination and dreams.

Maybe a little blood, sweat, and tears in there, while making all that determination turn from dreams into reality of playing the game her son loves so much.”