I couldn't wait to share this article with all of you. My friend and fellow hockey mom, Caroline Stanistreet,  sums up well, the range of emotions you feel as your child makes that transition from youth to high school hockey, or perhaps is ready to put the skates away and move on to another sport. The smiles,the goals, the passes, the painful losses, the glorious wins, the friends, the tears, the locker room dances, the long drives and in the blink of an eye, it's over. You may want to have a tissue handy for this one.


This spring marked the end of an era, the end of a fun and interesting excursion called youth hockey. Our son Sean finished his second year as a Bantam Travel player, thus over a decade of memories on-ice and off-ice have been flooding, or perhaps icing over, in my mind.

So, fellow Hockey Moms and Dads…do you remember when... the first year he laced his own skates, then the time came when he said, “I can do it all by myself!”

We waited in line quite patiently for his skates to get sharpened. While waiting, we strategically planned the next time his skates needed sharpening, so we could be first in line at the hockey shop the second it opened.  His first time he was checked, scary or what? The first clean check HE performed on another player, and you felt some strange satisfaction known as "payback."  He’d forget a glove, a helmet, or a skate before a game...nothing major!! We boiled mouth guards for that "custom fit," which the kids all chew to smithereens anyway.
They played Knee hockey in the hotel hallways--until the security guard sent them away. Parents talked in the hotel hallways until the wee hours of the morning--until the security guard sent them away. The moms would plan carpools each week to and from practices and games, often a part-time job in itself but well worth the effort. Your first whiff of hockey equipment left you breathless. For some reason, the kids could never smell it.   You visited the opponents’ towns so frequently, you could practically visit your favorite breakfast place and order “the usual.”
Your child may or may have not had a letter on his or her jersey one year or another, but you still had the extreme satisfaction knowing he was still a team leader. 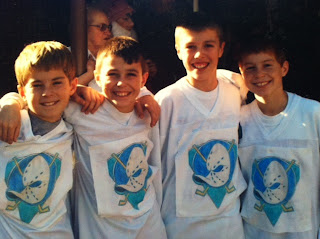 The relief you felt before every Halloween because you know you had a ready-made costume, all thanks to the countless practice and game jerseys lying around. The best part was that the kids would collaborate and do it together, forging a “band of brothers” year after year.


You hoped there was a defibulator nearby because you were about to witness his very first tournament-championship-shootout-goal attempt and your heart raced like never before.  The term "reinventing the wheel" to this Hockey Mom is year after year of working at the all-important snack bar. You may have asked yourself, “Hmm...how does that slushie machine work again?” You would put your kids to work and try to make it “educational” by having them make change. All that while hoping to remember how to refill that blasted cappuccino machine if it ran out.

We’d pass the time with other parents between tournament games by playing "what's the coldest rink you've ever been to?" There are quite a few to choose from!!  You would head to the hotel pool to sit on a lounge chair and watch your kids burn off even more energy. Moreover, it was certainly nice to get out of the cold for a just few hours.
And today… You can look down at all those wide-eyed 4 year olds, toppling onto the ice in their first Tyke Fest, then look up at your Bantam child and wonder where all the time went.

Posted by Syracuse Hockey Mom's Network at 6:12 PM No comments:

A Hockey Mom Reviews : MoGo In Our Lives

A Hockey Mom Reviews : MoGo In Our Lives: I often tell you about MoGo Flavored Mouthguards, but they are honestly really tasty! Yes that is funny to say that mouthguards for Hockey a...
Posted by Syracuse Hockey Mom's Network at 5:47 PM No comments:

A Hockey Mom Reviews : LUGZ FOR THE BOYS OF HOCKEY

A Hockey Mom Reviews : LUGZ FOR THE BOYS OF HOCKEY: My boys are in hockey clothing, morning, noon and night! I want them to look cleaned up and pulled together no matter where we are headed an...
Posted by Syracuse Hockey Mom's Network at 5:46 PM No comments:

Hockey Hall of Fame In Toronto

Posted by Syracuse Hockey Mom's Network at 8:41 AM No comments: