Orange to ‘Skate for the Cure’ this weekend against Mercyhurst University - LocalSYR.com powered by NewsChannel 9 WSYR Syracuse

Orange to ‘Skate for the Cure’ this weekend against Mercyhurst University - LocalSYR.com powered by NewsChannel 9 WSYR Syracuse
Posted by Syracuse Hockey Mom's Network at 8:42 AM No comments:


It was painful to watch when it happened and the recovery was long and painful too. My son's wrist snapped when he went flying into the boards during a tournament in Niagara Falls. Far from home, we had to take him to a hospital in Niagara Falls. It was scary for him and for us, not knowing the doctors, the hospital and having gunshot victims right next to us. After an X-ray confirmed the break, we rode in an ambulance to Children's Hospital in Buffalo. Brighter, more cheerful surroundings, but nothing could cheer up our hockey player. It wasn't just his wrist that was broken. His heart was broken too. All he wanted to do was play and felt a pang of guilt, that he was letting down his team. He insisted on staying until the end of the tournament. What a great bunch of boys though. His teammates rallied around him and even dedicated their victory to him. Note the trophy ON the cast in the photo above. That Niagara Falls fracture would be the first in a long line of injuries for my boy. Our orthopedic surgeon now on speed dial, there was a lot we learned about injuries, treatment  and prevention.
To prevent muscle and joint injuries, get your kid in the habit of stretching! This year my daughter's coach mandates all players arrive 45 minutes before each game to get their muscles moving before they get dressed and hit the ice. I've noticed the kids are having a lot of fun, getting creative with their warm ups led by their team captains.
Treat bruises with RICE. Rest, ice, compression and elevation.Same with sprains, but a trip to the doctor is in order too with a sprain. Breaks require a trip to the emergency room. If you can't call for an ambulance, using a shinguard to support an injured forearm bone or shin bone will help. Experts say wrap the guard around the limb and secure it with hockey tape to help stabilize the injury during transport. Expect a two month recovery time and be prepared for a range of emotions which may include anger, sadness and even depression.Don't isolate them from teammates and coaches. My son stayed active with the team, went to the games and offered some great defensive strategies from the bench.It wasn't easy and it seemed like the longest season ever, but stay positive!
Stress to your kid that they should never skate through pain. If something hurts, they need to get off the ice! This especially goes for hard hits to the head. I saw it happen just this past weekend when a player's head hit the crossbars of the goal. He went down hard and was down for a few seconds (though is seemed longer.) He got up and he had some help skating back to the bench. Next period he was out skating.  He didn't tell anyone that he may have blacked out for a second and didn't share the truth about his headache. Turns out he has a mild concussion. Let's make sure our kids understand the seriousness of concussions and don't hesitate having them checked out by a doctor ASAP! Even if the impact seems minor, coaches and parents must react quickly and smartly. When in doubt, sit them out.  The rule should always be, play it safe!
Posted by Syracuse Hockey Mom's Network at 5:38 PM No comments:

From Rookie to Pro Hockey Mom 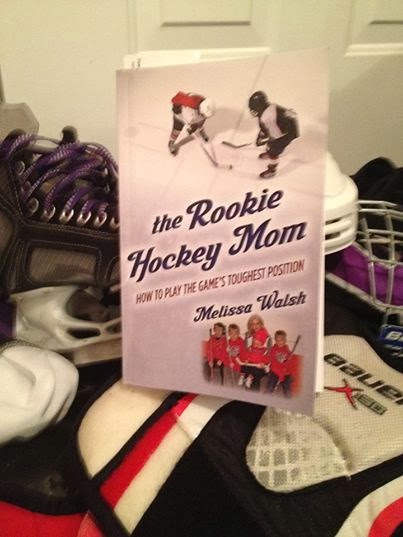 Special thanks to hockey coach/mom/author Melissa Walsh for sending me a copy of her great book. Well done! Melissa takes moms by the glove to glide them through the youth hockey years.  The Rookie Hockey Mom is packed with hockey history, tips and guidance that will turn you into a pro!


From the Pages of the Rookie Hockey Mom

* During a birthday party competition of pin-the-tail-on-the donkey, you overheard her desribe many of the six-year olds as,"Good, but lack focus." You also overheard her directing them,"Heads up."

*Though she hasn't been able to afford to buy herself a new winter jacket in three season, she defended her purchase of a $240 hockey stick by insisting, "The old one had no goals left in it."


* Her first-grader told his teacher that Thanksgiving is a holiday celebrating the first hockey tournament.

Posted by Syracuse Hockey Mom's Network at 2:48 PM No comments: 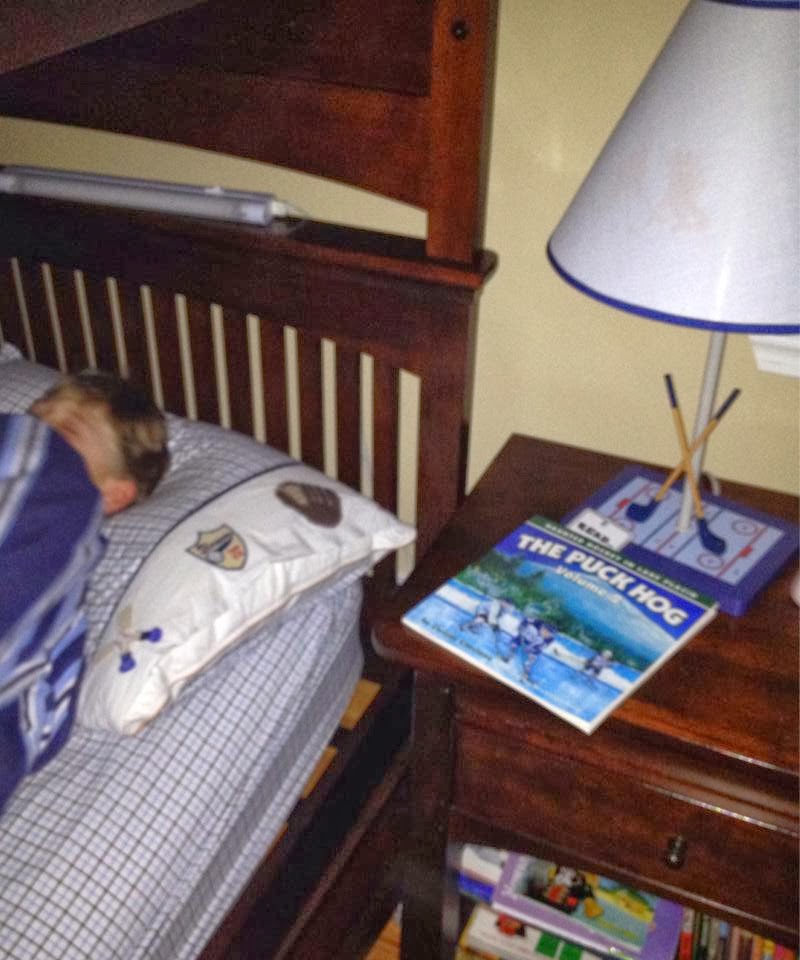 We know the sting of defeat and the agony of the bench, that only a mom or dad can feel. There are tribes in New Zealand that inflict pain on their victims in more subtle ways than the game of hockey on hockey parents. But the hockey mom and dad endures and pays the price as long as the ice is available. Somehow our children who cuddle their hockey sticks and dream of chasing the puck in the night make it all worthwhile.
Posted by Syracuse Hockey Mom's Network at 6:50 PM No comments:

Stat keepers. Every team has them. Look in the stands and see how it's being done these days. Check out what I caught on camera.  Old School vs "Ischool"

- Posted using BlogPress from my iPhone
Posted by Syracuse Hockey Mom's Network at 6:32 PM No comments:

As seen in USA Hockey Magazine


Take two parents who work full time, add hockey playing children, a cup of after-school activities, a dose of volunteer work, a pound of housework and what have you got? The recipe for a nightly dinner dilemma!  What’s a hockey family to do? The crockpot just may ease your hockey season indigestion. By simply dumping everything into the slow cooker in the morning, dinner is ready for your family in time for late-night hockey practices. Bam! You’ve just saved yourself time, money and whipped up a healthful alternative to the fast food pit-stop.
It wasn’t hard to recruit hockey mom Jackie Waldon to the crockpot army. With four boys to feed, she presses the crockpot into service weekly, cooking everything from pulled pork to chicken stew and even breakfast, “I think for working single mothers like myself, it is one of the best tools to have for a hot cooked meal. When I work nights, I’ll put oatmeal, sliced apples, cinnamon and sugar and water in the crockpot and breakfast is ready for them in the morning.” 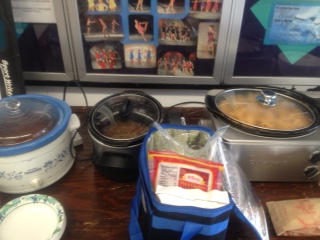 Crockpot meals can turn a profit at your tournament table too with delightful dishes like pulled pork and macaroni and cheese. Syracuse Nationals hockey mom Kim Tretowicz uses it for team dinners. Her chicken wing dip scores big, “Although not the healthiest choice, the boys love it. It’s a quick and easy appetizer. We had a team dinner in between two games in . I put it together in the morning and it was steaming ready after our first game with chili, a big tossed salad and pizza. The kids were able to rest, eat and then head back to the rink for the 2nd game.”

hockey mom Jennifer Grinnals turns to the crockpot to save money during tournaments as well, “Rather than eating out all weekend, we make meals with the crockpot. Most times the kids would rather spend time in the hotel than be in a restaurant, so it’s a win-win for everyone.” Jennifer’s tip when cooking ground beef?  Brown up a few pounds when time allows, then freeze in one pound packages for a quick crockpot meal without the prep work.”
No question it works for hockey families by adding the much needed ingredient of comfort to a long, cold and sometimes stressful season.

Share Your favorite recipes for a chance to see them published in the March 2014 issue of USA Hockey Magazine. Send an e-mail to whatacrock@usahockey.com
Hockey mom Christie Casciano Burns  is the author of The Puck Hog and Haunted Hockey in , The Puck Hog volume 2


Posted by Syracuse Hockey Mom's Network at 6:18 PM No comments: