Coolest Thing on Ice for everyBODY 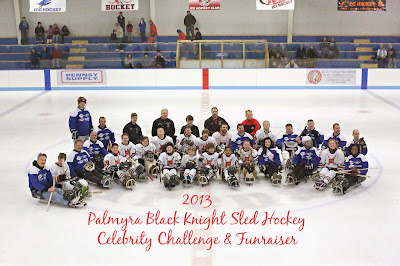 
Sledge hockey (known as sled hockey in the United States) is a sport that was designed to allow participants who have a physical disability to play the game of ice hockey. Ice sledge hockey was invented in the early 1960s in Stockholm, Sweden at a rehabilitation center. It is currently one of the most popular sports in the Paralympic Games.

The Palmyra Black Knights Sled Hockey Program/Team was founded in 2012. It is a not-for-profit 100% volunteer organization. The program/team was formed to enable youth and adults with disabilities in the Greater Hershey/Harrisburg area to play disabled sled ice hockey.  The program is USA Hockey sanctioned, and affiliated with the Palmyra Black Knights Organization.
The Black Knights Organization, a 501(c)(3) (charitable organization) is defined by its mission to grow the sport of hockey, permitting “everyBODY” to have an opportunity to play regardless of one’s physical disability or their ability to pay.  Our commitment is to offer the sport of Ice Sled Hockey for those individuals ages 5 and older.

Each participant will require a kit, which includes proper protective gear (helmet, neck guard, elbow pads, gloves, shin guards) a sled and sticks; these items costs approximately $1,126 per participant. In addition to the kit, expenses will include USA Hockey annual dues, jerseys, purchase of ice time for practices, scrimmages, games and tournaments.

Currently we have upwards of 15 individuals actively participating and are constantly growing. Our team members include individuals with Cerebral Palsy, Spina Bifida, Ehlers–Danlos Syndrome, Spinal Cord Injuries, Autism, and dismemberments; we have several wounded warriors on our team as well.  We currently have 14 active members of our team from who cover Dauphin county, Lebanon county, Juniata county, Schuylkill county and Northumberland county

Our goal with the team is for the participants to have no financial obligation as many are already faced with multiple medical issues.  Surgeries, therapies, durable medical equipment ect are not cheap even with insurance coverage.  So we decided to hold a Celebrity Sled Hockey Challenge to raise money for our team.

We invited local Celebrities (AHL alumni,  TV and radio personalities, business owners, police and fire fighters, newspaper reporters) to play against our team.  Everyone had to play in sleds, no stand up hockey playing allowed.  No experience was necessary as it was more fun to see the Celebs out of their element and our team doing what they do best!!

We started off the game with a donation presentation from the Hershey/Palmyra Sertoma club in the amount of $500. Then our national anthem was performed by an American Idol Hollywood week participant, Courtney Calle.

During our game, we had 24 raffle items ranging from a signed Philadelphia Flyers jersey and AHL Hershey Bears Jersey to baskets filled with local restaurant gift cards and Hockey Mom’s survival kits.  Our club’s youth teams were instrumental in gathering the donations for these baskets.  They came through in a huge way.  I am still in awe at their accomplishment!!  We also sold 50/50 tickets.  After the game, Miss PA Outstanding Teen announced the raffle winners.

All total we were able to raise over $3,100 for our team.  But more importantly, we brought awareness, more fans and hopefully more players to our team.  The celebrities were all smiles during the game and have already committed to playing in next year’s game.  They are ready for a rematch as they lost 5-1.

Wanted: Reliable parents to work weekends in cold conditions. Must be a good organizer, willing to answer phone calls in the middle of dinner, and keep the peace with dozens of well-meaning, opinionated hockey parents. No pay. Coaches shouldn’t have to take out ads, but it seems every year fewer parents are willing or able to step up and pitch in for the team. Given current economic conditions, many parents are working longer hours and even two jobs, and have less free time to give. But as my wise Italian mother would say after our big Sunday dinners, as we sat there with stuffed bellies, piled up dishes, pots and pans, “Many hands make light work.” She would assign each of us a cleanup duty. Before we knew it, all six of us were out in the yard, getting in some last-minute play before the sun settled for the night. That same simple theory can help your coach run the team, when parents provide assists. The trick is finding the role that is right for you. If you’re level headed, a good organizer and don’t mind fielding phone calls during the week from parents, consider the role of team parent. That job consists of everything the coach doesn’t have time to do. Sound overwhelming? You don’t have to go it alone; take advantage of the diverse talents and skills of moms and dads. You might be surprised how willing parents are to help when given a clear and specific role. Parents who travel a lot might be able to wheel and deal team discounts for hotels and restaurants. Store managers might be able to score plates, cups or deserts for a tournament or team parties. I loved the year a parent with a printing company made wallet sized laminated cards with everybody’s cell phone number and e-mail address. Skills in the kitchen can come in handy when your team needs to whip up meals for tournaments and fundraisers. I will caution though, sometimes finding the right role can come by trial and error. For example, running the clock for a game takes a very brave soul. You’ll find out very quickly if you can handle it the first time you mess up on the penalty minutes and become the object of ridicule and angry shouts from the stands, “Clock! Clock!” If you can turn a deaf ear to it, you will find yourself with the best seat in the house! When kids see parents working hard for the team, parents in turn may see that same spirit and enthusiasm translate on the ice.
Posted by Syracuse Hockey Mom's Network at 6:04 PM No comments: