From Rags to Riches; Hockey Moms Reflect on Journey to Nationals

Of all the sports my children have played, hockey has always been my favorite one to watch. Sure, it's freezing cold (even when we play in August), and we often travel far,  play early or late, but it’s the one sport that has always captivated my attention. I don’t understand the intricacies of the game – it is not important for me to know. What I know is that my son loves it and not only has he become a better hockey player in all these years, but it has also contributed to shaping him into a fine young man. 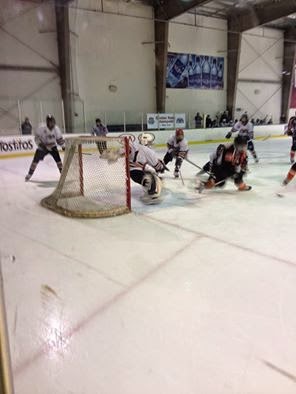 We have been blessed with talented, caring, passionate coaches throughout the years that teach not only hockey skills, but life lessons as well. Whispers of Nationals started early for this “rags to riches” team. This was Kyle’s first year playing for this organization, and knew
w many of these boys only from competing against them throughout the years. In his mind, he had something to prove – his ego was at work. We grew to love the players, and their families. While it was always a long shot, Nationals was still out there as an attainable goal. Whispers turned to talk.

After qualifying for Nationals at States, we had less than three weeks to make these boys dream happen. Blood, sweat and tears were shed to make this a reality for them. Talk turned to action. 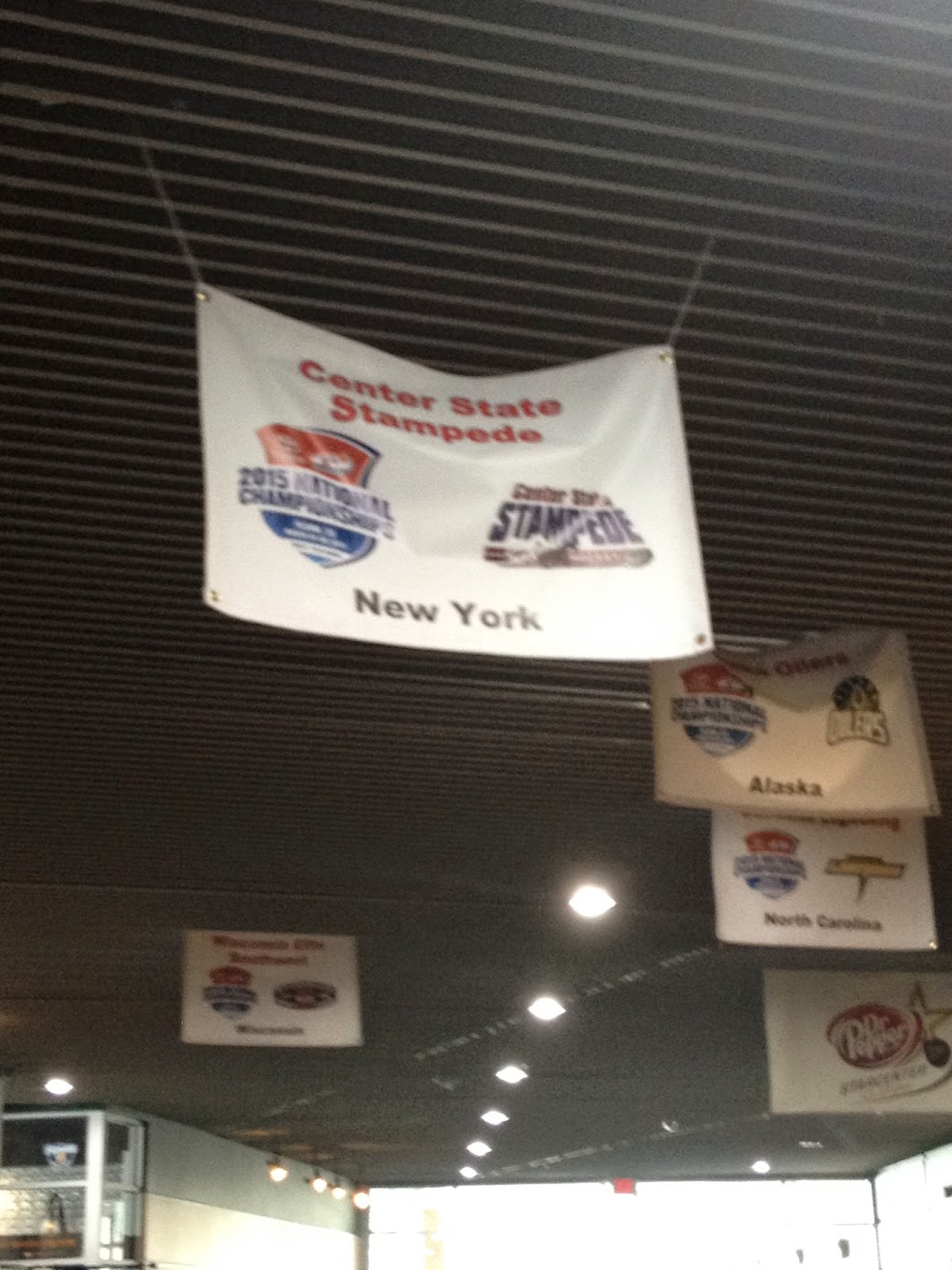 Everything seemed so “official” at Nationals - men in suits with clipboards sitting in the bleachers evaluating kids, catered meals for important people, team banners from across the country hung from ceilings, Nationals apparel flying off the shelves. The boys looked “different” to me in those first couple of games. They were nervous. They lost their first two in tight games to teams that they could have beat on any other given day. After losing the first two, we knew we would not advance to the crossover. Perhaps it was because there was nothing left to lose, but the boys were “on fire” in their last game. They beat a team from California that had lost only one other game their entire season, and that was in their State Tournament.

As it turns out, we had a pretty amazing place to play. Dallas, Texas is a place neither Kyle nor I had been before. It’s a beautiful city that provided the backdrop for memories that I think both of us will carry with us forever.

From a mom’s perspective, hockey is bigger than the game played on the ice. Hockey is getting to an ice rink an hour before a game even starts so your child can do off ice drills with his teammates, tape sticks, suit up and rock it out in the locker room to their favorite “pump up” songs. Hockey is traveling thousands of miles in a season, staying in random hotels in random cities weekend after weekend because that’s how it’s done. Hockey is “killing time” with people who go from strangers

to family in a 70 game season. Hockey is watching your child share experiences with young men he will remember and tell stories about well into his adulthood. Hockey is seeing a passion and fire ignited in your son when he skates onto the ice that is unparalleled anywhere else in his life. Hockey is pride, fear, excitement and love!

“This is your moment. You’re meant to be here.” – Herb Brooks


Jennifer Terzini is a Hockey Mom of Kyle Terzini, Defenseman from Liverpool, NY

Last month my son Tommy’s 16U hockey team, Center State Stampede, traveled to Plano, Texas to compete in the 2015 Toyota-USA Hockey Youth Nationals. The days leading up to the tournament were exciting! When we arrived at the Dr. Pepper Star Center Ice Arena, the reaction was one of amazement - to finally be at the place we had only seen photos of online. All of the banners were hanging from the ceiling displaying each of the teams across the U.S. that would be representing their state (even Alaska). Only two teams from each state were selected, so it was quite an honor for Center State to be there representing New York State. Us Moms quickly found our team’s banner and took pictures of it! 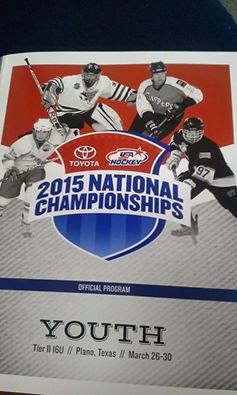 On the morning of the first game, the line to buy Nationals apparel was long, but devoted hockey moms waited to get items for their sons, siblings, spouses and even Grandparents! As the anticipated first game approached, the lights on the rink were bright, the mood was positive, and the team was ready to go! Games were going on all around us, and just to watch teams from all over the U.S. experience hockey at such a high level was surreal. The other 16U teams were very good and it was impressive to watch such great hockey being played by young teens. As I watched the first game, I realized that these teams were the best of the best in their state for a reason. It was obvious how skilled they were. The skating was fast, the puck was cycled quickly and the players competed hard right up until the end of each game. No one gave up; everyone wanted to win, and it showed. Each player gave it their all.


Another apparent fact was that if just one mistake was made, the opponent quickly capitalized on it. In previous season games, Center State could usually recover from a mistake and answer back with a goal to even the score. But against another state ranked team, it was not so easy. Center State lost its first game to Connecticut, by only two goals, and its second to Texas, by only one goal, but won the third game against Orange County, California’s number one team in their state. It was a hard fought, physical game right up until the end, and Center State won by only one goal. A California Mom told me after the game that Orange County had lost only one game all season, at states, and this was only their second loss all year!

Orange County was ranked 11th in the nation! Many parents and spectators said that it was the best youth hockey game they had ever seen! After the game, several of the California parents came over to shake our hands and tell us how good our team was. The other hockey moms from California were very nice and complimented our boys. Center State won against the most challenging team it faced, yet did not have enough points to advance to the semi-finals.

Overall, the trip to Nationals was amazing! To be able to hold its own against such tough competition is something for the team to be proud of! It was a wonderful experience for my son, Tommy, the Center State 16U Team, and their families. The memories for the boys and us Hockey Moms will last a lifetime.

Pam Bianchi is a Hockey Mom of Tommy Bianchi, Forward from Liverpool, NY

Watching from A Distance
by Suzanne Kozikoski
Liverpool, NY

A hockey mom's perspective from another state is 100 times more nerve wracking than actually being at the game but when you have another child that has activities during the same week as Nationals you have to stay home while sending your husband and son on their way. I had some great hockey moms who did go, because you can't always rely on your husband to keep you up to date on games and keep you posted with pictures, that kept me informed with updates throughout the game and throughout the day.

As a goalie mom I think I see the game differently than that of a player mom.  I watch the other team, do they have the puck, are they in our zone, do we have defense?  Did my son just let in a soft goal, do we have the defense ready, or was the goal just a damn good goal that the other team got on us? I also watch for shots on goal, are we getting as many shots on goal as the other team or is it lopsided?  With that being said you can't have parents sending you all that information minute by minute because they are watching their child and game. So you are kept in the dark about that, but thank God are kept up on the score and what period we are in.

So even though I was being kept updated throughout the  games by hockey mom, Pam Bianchi, and my husband, it was very hard, nerve wracking and at times tear producing, which was not good because I was at work for that one. I would have loved to have gone down and watch my son play at Nationals, but I would not have changed the quality time I spent with my daughter.  It was a whirlwind of emotions not only while they were in Texas, but even before getting them to Texas with States.

You can bet that when we go to Nationals next season, I will be going and will I be nervous? ABSOLUTELY but I will be watching the game sitting where I always sit on our side, right on the blue line without moving.

Posted by Syracuse Hockey Mom's Network at 6:43 PM No comments: