Getting the Edge in Tryouts

House evaluations and travel team tryouts are on tap at rinks across Central New York.  After you've done the equipment check and you've got all the right sized pads, here's a mental checklist for your kids before they hit the ice!

HOW TO MAKE A TEAM

Player selection, or "tryouts" is a necessary experience that can certainly be stressful for players, parents and coaches alike. I have been part of the player evaluation and selection process for the past 22 seasons and it never gets any easier. Here are some thoughts for players and parents to consider when preparing for tryouts.

LEAVE NO DOUBT
As a player, you need to have the mindset that it is your job to make the team, not the coach's job to pick you. You need to separate yourself from the rest of the group. If you don't, you risk being "on the bubble" and it may end up bursting at the end of the tryout. Here are a few ways to give yourself the best shot at making a team.

FLY
Play fast! Keep your feet moving and play with energy. Be strong in traffic and along the wall.

WIN THE LITTLE BATTLES
Win every 1 vs 1 battle all over the ice. Have a constant work ethic in every drill and on every shift. Get loose pucks first and play with an edge. Be hard to play against. Take it personally and never give up.

PLAY OFF THE PUCKResearch shows the best players in the world only possess the puck for about one minute in a 60 minute game. What are you doing when you don't have the puck? Support the play on offense and defense. Stay engaged and make a difference, especially when you don't have the puck.
CHARACTER MATTERS
Be a positive team player. Make your teammates better. Be willing to accept a role. The third line center that won't be happy unless he is on the first power play unit, probably gets cut. Carry your own bag and sticks even if your mom offers to carry them for you. Say "please" and "thank you" when you get a drink from the snack bar after practice. Do the right thing, even when you think nobody is looking. We have won championships with teams that were less talented, but we've never won a championship with teams that lacked character.

KEEPING YOUR EDGEIf you do make the team, congratulations! But, your work is just beginning. You now have the responsibility to get better every single practice. Do not take your selection for granted, because chances are, the players who were cut are making plans to get better. If you're not picked for the team, try to understand that players develop at different rates and times. As long as you are still being challenged, you will continue to improve. Keep playing and keep having fun! Hockey is a great game. 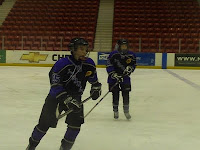 Posted by Syracuse Hockey Mom's Network at 5:49 AM No comments:

Greatest Hockey Legends.com: The Golden Jet: For The Record

Greatest Hockey Legends.com: The Golden Jet: For The Record: When it comes to the Winnipeg Jets, there may never be a greater player in city history than "The Golden Jet" Bobby Hull. If you have nev...
Posted by Syracuse Hockey Mom's Network at 5:19 PM No comments: 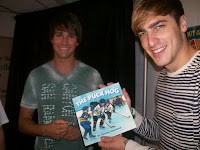 Nickelodeon stars from Big Time Rush autograph The Puck Hog!
In the television show, they play four hockey players from Minnesota who move to Los Angeles to pursue boy band stardom.  So kids, who do you think would have been the Puck Hog on their team?James,Kendall, Carlos or Logan? 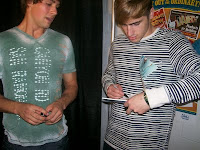 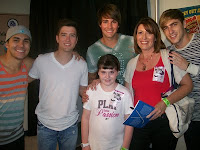 Posted by Syracuse Hockey Mom's Network at 5:16 AM No comments: