Posted by Syracuse Hockey Mom's Network at 11:51 AM No comments: 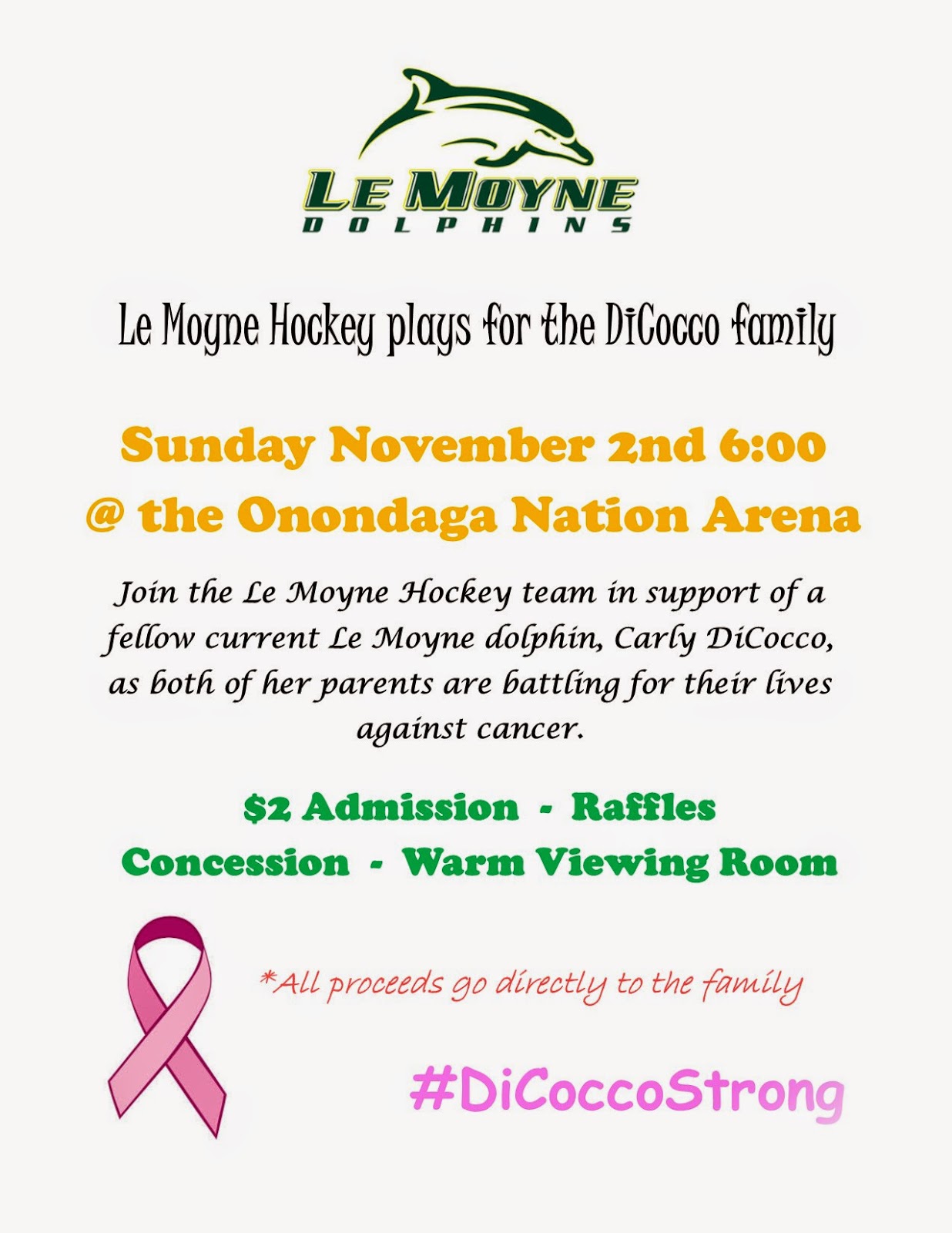 Posted by Syracuse Hockey Mom's Network at 7:43 PM No comments:

Power Play Nutrition for Your Kids

So what can you do to increase the number of hours your youth ice hockey player sleeps? What's the number one energy-sucking food for your kids? Read on!


Power Play Nutrition for Your Kids
Posted by Syracuse Hockey Mom's Network at 5:22 AM No comments:

by Bob Unger
The importance of goaltending to a hockey team cannot be overstated but, unfortunately, for a variety of reasons the attention paid to the training and development of goalies is typically an afterthought to the team practice. It is not uncommon to see the goalie spending half of the allotted practice time standing still.
As a former goalie, when I began coaching, my focus was ensuring I paid special attention to that critical position. While working with the goalies I was frustrated by my inability to prevent them from constantly backing up into the net instead of challenging shooters in practice sessions. Adding to that frustration was the fact that there were no training aids out there dedicated solely to goalie development. As a result, I realized I’d have to develop my own product to solve the “backing into the net” dilemma. After much development and trial the Goalie Band was created. While its’ initial use was to promote the challenging of the shooter, further drills have been developed to practice handling screen shots and working on reaction time, in addition to drills for shooters.
As a result of demonstrating the Goalie Band to a number of hockey professionals including, Sean Burke (Phoenix Coyotes Goalie Coach) and Rick St. Croix (Toronto Maple Leafs Goalie Coach), as well as many amateur players of all ages, I have received much positive feedback and interest across North America and Europe. The Goalie Band is currently being used at the Czech International Goalie Camp 2014 http://www.hockeycamp.cz/camps/goalie...
For more information on the Goalie Band please visit its web page www.goalieband.net or see me on Twitter @goalieband
Thank you,
Bob Unger
“Helping Coaches Coach”
Twitter - @goalieband
Posted by Syracuse Hockey Mom's Network at 9:29 PM No comments:

Now that the ice is made in most rinks in Central New York, hockey season is once again upon us.  But this year, it’s a little different as there is a Hockey Grandmom in heaven now, cheering on all the Tykes, Mites, Squirts, and any kid who is lacing up his or her skates for the next several months. That Hockey Grandmom was my mother, Jackie Coley. Her passing was one of those special occurrences that you sometimes hear about.  She died at 12:05 a.m., just 5 minutes into her 90th birthday. Since then, I have heard all kinds of amazing reactions and stories about that accomplishment.  First, living until the age of 90 in our world is quite a feat in itself!  One of the other things I’ve heard from a few people is that since her passing was an exact “circle of life” from birth until death, they are given extra special blessings in heaven.  I’ve read other obituaries about deaths on birthdays and wedding anniversaries and it seems more frequent than I first thought. And when her tired body began the shutdown to the time of passing, there was a Supermoon, which shined into the night on that August 9th. Cool stuff!

Jackie was a columnist for The Syracuse Post-Standard.  She wrote the “Social Notebook” for 22 years, and loved every minute of it. So here’s that unconventional part of Jackie - behind those fancy dresses, high heels and reporter’s notebook was a hockey grandmom.  Jackie was not your “typical” grandmom though.  Those grandmoms attend every single game no matter the time or temperature, but let me first share a little background on her marvelous and wonderful life.

She became a huge hockey lover because she married a huge hockey player - my father - Dan Coley, in 1956.  Dan played defense at Colgate University, and was co-captain of Colgate’s only undefeated team in 1947 when they finished at 13-0!

Years later, when my sister Melissa attended Colgate in the mid 70s, Mom would often accompany Dad to the village of Hamilton to watch some great Colgate hockey games. They would meet up with Melissa and her friends in the stands, and amidst conversations, Mom would cringe while Dad would tell the ref what he was supposed to do.  She would also accompany my dad to the Syracuse Invitational Tournament, held at the War Memorial and usually featured Colgate and 3 other top-notch college hockey teams, like Cornell and Clarkson.  Never mind the hockey game itself, as Mom could not wait to visit the Colgate hospitality room and do her usual socializing!!  She would still wear her fur coat, even if the War Memorial is known to be slightly warmer than most other rinks.

This went on for a few years until I attended Oswego State in the 80s, but she chose not to venture to Oswego’s hockey rink…only to Oswego’s swimming pool at Laker Hall, where I used to compete.  There, my father would yell, but not at the officials, but at me while I attempted to “sprint” during the 500 yard freestyle.  Jackie would wear that coat into the 85-degree pool area, as she was still thawing out from the late January walk from the parking lot.   My Dad passed away in 1982, but she continued to attend my swim meets.  Shortly after I graduated, she began writing the column she so dearly loved.

Fast forward to the late 90s – and there came the grandkids!  As a result, there was another “circle of life,” or should I say, circle of hockey games again. While Jackie was in the midst of writing the “Social Notebook,” which required attending fundraisers about 4 or 5 times a week, she still found the time to watch some of her grandsons’ youth hockey games. She would visit my sister Melissa, her husband Jay, and grandson Jack during Christmas breaks in New Jersey and watch Jack’s holiday hockey games and tournaments.  Upon her return, and always donned in that fur coat, she would venture to Shove Park in Camillus and watch my son Sean and dozens of other 4-year-old boys literally trip, tumble and pour onto the ice for the annual “TykeFest.”

She became quite enchanted with the development of youth hockey, which our father Dan and his brother Trey were also involved with for years in Buffalo.  Undaunted by what her editors told her not to write about as a social columnist, she covered the dedication ceremony of the new Shove Park locker room expansion for one of her Social Notebook columns in 2007.  She told me it was one of the best stories she had ever written, and a framed version of her story still proudly hangs on a wall at Shove Park – but not near the hockey rink, rather, in the more appropriate Community Room!

So, Hockey Grandmoms out there, this tribute to my mom is for YOU!  Your kids and grandkids thank you for loving them enough to help them with transportation, taking weekend trips to tournaments, or buying your grandchild a post-game hot chocolate.  And to them, it really doesn’t matter whether you wear a fur coat, a down jacket, or a hockey jersey to the games. Just being there is enough!

Posted by Syracuse Hockey Mom's Network at 6:47 PM No comments:

Top 5 Reasons You Should Build A Backyard Rink THIS Year

Top 5 Reasons You Should Build A Backyard Rink THIS Year
Posted by Syracuse Hockey Mom's Network at 7:42 AM No comments:

as seen in USA Hockey Magazine

So who wants to be a team manager? I remember one season when the coach asked that question and all the parents lowered their heads. No hands went up. No surprise there. Who has the time and the energy for taking and making countless phone calls, booking teams, tournaments, organizing fundraisers and dealing with parents? It's challenging enough to get a decent meal in your kid’s belly and to the rink on time with all their equipment. Pile more duties onto an already full plate of just being a hockey parent? Run the risk of a mid-season meltdown? No thank you! 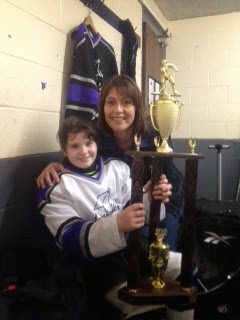 In the excitement of a new season, and when no one else is volunteering, you might be tempted to find that inner hero and stick up your hand for every job. But journalist and hockey mom Randi Chapnik Myers, who blogs at www.stixandpux.com, has some cautionary advice for those who get the urge to strap on the super hockey mom or dad cape. “Remember that it's a long year, especially if you have other kids, and school/work will heat up, too. Bottom Line: If you take on more than your share, you'll burn out fast,” says Chapnik Myers. “Think about what you're really good at and stick to it. One mom was a photographer and she had her camera at every game. At season's end, she made a phenomenal book of photos for each player. Start with one job. You can always take on more.”
If you do take on a leadership role, realize the job calls for diplomacy says Oswego, N.Y. hockey mom Carla Peacock. She and her husband should know, having evolved from youth hockey coach and manager to college club hockey coach and manager. “It is important that you don’t come in like you know it all, and try to take over,” says Peacock. “There are people who enjoy helping as much as you do.”
hockey mom Jen Kurzenknabe mastered the task of team manager by organizing and delegating, “Being a hockey manager can be challenging, but once you have all the initial things done for your team like the meetings, paperwork and volunteers, it is very rewarding to see all of your effort and planning put into action.”
Teams need parents to step up and there’s a job for everyone. Remember, just like your kid’s team, it should be all for one and one for all.

Posted by Syracuse Hockey Mom's Network at 5:58 PM No comments: