Is Hockey Just a Game? Check out this poem!

Some say it's just a game.
But I disagree.
It ain't a game, no it's way more.
From 5 am practices to waking up at midnight 'cuz you're too excited to
sleep.
Nah it ain't just a game.
It's a passion, a calling, a way of life.
Something you commit every fiber of your body to perfecting, but never can.
Nah it's not just a game.
Losing a game doesn't bring 17 and 18 year old young men to tears.
No game has ever united an entire county.
Nah hockey ain't a game, it's way more.

Special thanks to Matt's mom for sharing her son's hockey poem with us!  Matt is a defenseman with the Baldwinville Varsity Hockey team.  Great job Matt!

Posted by Syracuse Hockey Mom's Network at 4:18 AM No comments:

Win a copy of The Puck Hog

Hockey mom Amy Colclough whips up another recipe for hockey parents on the go. She says it may sound wierd, but it's easy, fast and tastes pretty good! Sounds like a hat trick to me.

In a large pot
Sauté 1 lb lean beef or ground turkey with 1 diced onion, 2 cloves garlic mined (or 1 tsp garlic powder), 1 ribs finely diced celery (if you don’t have fresh celery you can use 1 tsp celery seed)
Salt and pepper to taste, drain
Dump UNCOOKED egg noodles on top (1 bag)
Poor 1 large bottle of V8 tomato juice overcookedmeat and dry noodles. If this doesn’t cover the noodles completely add water til it does. (I use lower sodium spicy V8)
Stir in 2 Tbworcestershiresauce (more if you really like the flavor)
Simmer til noodles are just done (it will be mushy if you overcook noodles). Simmer uncovered (this will prob take 3 to 6 minutes depending on noodle size)
Let cool slightly,
Stir in3/4 container sour cream.
*If it looks like it is simmering dry – add a little water. Stir often.
Now you have orange slop and you only used one pot!
For some reason, kids like to eat something called slop…go figure!
Amy Colclough
Posted by Syracuse Hockey Mom's Network at 4:24 AM 1 comment:

Posted by Syracuse Hockey Mom's Network at 8:52 PM No comments:

Posted by Syracuse Hockey Mom's Network at 10:47 AM No comments: 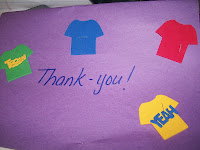 From the "K" Team teacher at Wettel Elementary
Thank you for coming to Vernon Elementary today.  What a great story with an inspirational message!  Being hockey fans  in our house as well, we are bringing up our children the same way.  Teamwork is becoming a lost art and I pray through your work your message will be heard loud and clear! 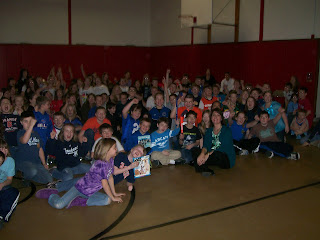 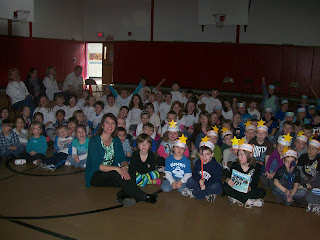 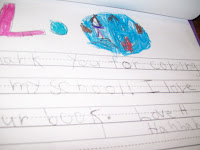 Posted by Syracuse Hockey Mom's Network at 4:03 PM No comments:

Heartwarming Tribute On The Ice

Hats off to the Fulton Squirts hockey team,  honoring a teammate's father who left with the 44th Unit engineer company, Fort Ontario Reserve Center for Afghanistan. 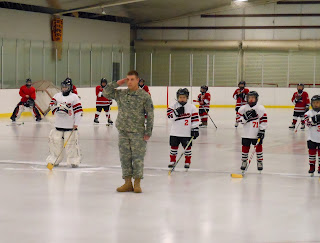 Before their hockey game against Midstate, Sunday, January 29th the Fulton Squirts took to home ice to honor Army Sergeant and the father of one of their teammates, Sergeant Rob Doran, who is now currently on active duty in Afghanistan. Sergeant Doran serves with the 444th Unit Engineer Company, U.S. Army Reserve Center, Fort Ontario. Doran’s Unit was deployed for active duty on February 2nd to serve in Afghanistan.
Before their warm-up the team and their coaches called Sergeant Doran to the ice for the playing of the National Anthem. After, with the crowd still on their feet, the team, all sporting yellow tape on their hockey sticks in homage to Doran, surrounded the sergeant in a circle as they tapped their stick on the ice. Simultaneously it was announced over the PA system that the team would wear the yellow tape on their sticks for the rest of the season in Doran’s honor and with the hopes for his safe return home. The tribute ceremony drew a massive round of applause from both the home and visiting crowd.
After Doran performed a ceremonial puck drop he took an honored spot on the coaches bench to witness his son Noah Delaney’s last hockey game before his deployment.

by
Todd A. Shear


Posted by Syracuse Hockey Mom's Network at 8:47 PM No comments:

Posted by Syracuse Hockey Mom's Network at 8:16 AM No comments:

Okay, so we don't like it when our kids are talking trash on the ice, but this is one we don't mind sharing.  We're talking Garbage Brownies!  This is a favorite among hockey players.  It makes a lot of them and they are awesomely good.  Recipe courtesy of B'ville  hockey mom and contributing blogger, Amy Colclough.  YUM!
Garbage brownies (aka evil 3 layer brownies)
1 box 13x9 size brownies – make according to package EXCEPT PULL out 3 minutes early from oven
Sprinkle1 bag mini marshmallows on top and bake 3 more minutes. Pull out.
Let cool
TOPPING:
1 cupmini choc chips, 1 cup peanut butter, 1 teaspoon butter: MELT in microwave for about 4o to 45 seconds stir til melted. DO NOT OVER MICROWAVE. It will be lumpy and appear not melted, as soon as you start stirring, it melts. Fold in 1.5 cups Rice Krispies. Spread on top of marshmallow topped brownies. (you could also do this on stovetop with double boiler)
Let cool completely. Cut and serve. They are AMAZING. I have learned to cut these smaller because they are so rich,  Enjoy!
Amy Colclough
Posted by Syracuse Hockey Mom's Network at 6:40 AM 1 comment:

The Hearts of Champions 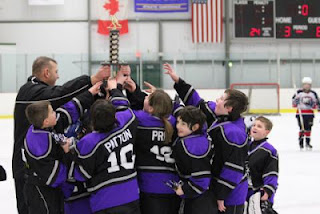 Posted by Syracuse Hockey Mom's Network at 7:57 AM No comments: 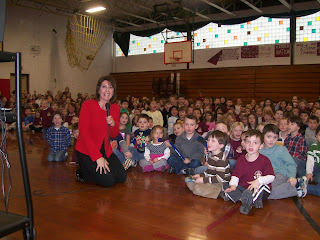 
Peace and blessings!
You give an excellent presentation filled with enthusiasm and energy!!
Thank you so much for coming to our school - it was much appreciated.. Everyone enjoyed your presentation.

You are an excellent speaker! 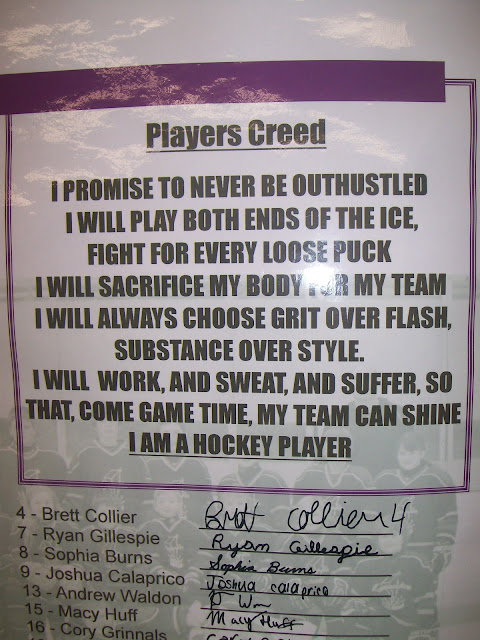 Posted by Syracuse Hockey Mom's Network at 3:22 PM No comments: