SIZZLING SUMMER ON THE ICE

Our season starts in September, but we haven't totally abandoned the rinks for the summer. My kids just finished up the two week Syracuse University Youth Hockey School at the Tennity Ice Pavilian on the SU campus. We've done plenty of summer camps and clinics over the past eight years and we would rank this one right at the top of our list. Head instructor Paul Flanagan, coach of the SU women's hockey team, kept it fun and challenging for the kids. It was just the right mix of on-ice/off-ice skill development with Division 1 players and coaches. The kids had a ball off the ice spiking a volleyball on the court that was a short walk from the rink. They got to take in some hockey-related films and my daughter was introduced to a strength-training program.
It was especially motivating for my daughter when the coach put some of the SU women hockey players on the ice with the kids. They impressed my son too, who said something like, "Wow, they were amazing...those girls can really skate!" Coach Flanagan plans to run another two week school next summer and I'll be sure to post dates and times for everyone. Be prepared however, you may end up having kids who end every sentence with "aye?" Guess having a Canadian coach (Graham Thomas) around you for two weeks can rub off a bit, aye?
Posted by Syracuse Hockey Mom's Network at 4:06 AM No comments: 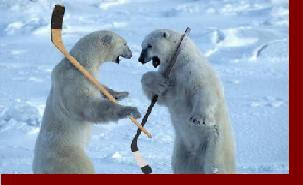 We're now just weeks away from tryouts, evaluations and eventual weekly practices. Before we kick into high gear, I wanted to share this article that you might want to keep handy during the long season. I found it to be a good motivator and it managed to keep me focused on the important stuff. It was written by a dear friend and veteran hockey mom, who promptly put it on my desk the day she learned my son had laced up and vowed to never skate without a stick in his hand. I placed it in my top desk drawer six years ago and it's been there ever since. Here are some excerpts. Enjoy!

"The hockey mom is truly a model of unacclaimed virtue, a paragon of womanhood tested beyond all limits. She is someone who shivers at 4,015 rink sides from Elmira to Ottawa, from Niagara to New Jersey, and who drives through four-hour blizzards for a one-hour game. She buys $200 ice skates instead of furniture, lives six months in long underwear with skate guards in her pockets. She sifts through the moldy mysteries of a hockey bag, dripping over hockey pucks in drape folds or tries to maneuver past hundreds of splintered hockey sticks, too good to be thrown out, in the upstairs closet. She lugs the hockey bags on her shoulders when her child is a tyke, bakes cookies for the locker room when he's a squirt and billets young Canadian teenagers when he's a bantam.

There are no holidays or time-outs for a hockey mom. The day after Christmas is always spent on the road to a tournament. It's almost Easter before the season ends. That means six months of car breakdowns in Massena and whiteouts in Pulaski and Oswego. Hockey moms don't flinch when they hear that five more games have been added to the schedule, though. They just postpone their cleaning and cooking for one more month. The hockey mom endures and pays the price as long as the ice is available. Somehow the 12-and 13-year-olds who cuddle their hockey sticks in the night make it all worthwhile.

"FUN" DRAISING WITH YOUR HOCKEY KIDS

We were so thrilled when my son landed a spot on the hockey travel team. It was all new to me and I'm still gradually learning the ropes as a travel hockey mom. I figured a travel team meant a little more traveling, a few more games, but had no clue as to how many more dollars were required as well.
The blow was softened when the coaches explained to parents that we would not have to shoulder all of the extra costs for travel and tournaments. But then, just as I had feared, they said it. They said the dreaded "F" word. Fundraising. Ugh! Not again! At this point in my life (two kids in Catholic schools who've played other organized league sports) I have had my fill of fundraising. I truly think I'm suffering from battered fundraising syndrome. You know the signs and symptoms if you've been there. Your friends point at you and warn others to "look out, hide your money, here comes Willy Wonka and her fundraising factory!" Chocolate bars, cookie dough, water bottles, pies, Christmas wreaths, candles, 50/50 raffles, Ipod raffle tickets, yes, I've hawked it all.
Being the travel team newcomer and because this meant so much to my son, I dared not complain. So I managed a pleasant smile as the team decided to go the bottle and can drive route, as our first effort. Fortunately, we did not have to go dumpster diving (I've done that too!) As we hit our team neighborhoods, all of us parents watched in amazement as our young hockey players tackled this task with great enthusiasm. They worked out strategies and set goals, just as we would soon see them do on the ice.
By the end of our drive, we were all exhausted, smelly and sticky. But, we realized we had gained much more than 7,021 bottles and cans that day. The kids got to spend time getting to know each other outside of their pads, helmets and practices. Parents also found a lot of common ground. That's great when you can develop that kind of bonding early on in a long season that has you spending many hours together on the road and on a frigid bench in an unheated rink.
So, the next time your son or daughter's team asks you to help raise money, think of the other benefits that go along with working together for a common "goal" both on and off the ice. Do you have a unique team fundraising idea? I would love to hear from other hockey moms!
Posted by Syracuse Hockey Mom's Network at 1:23 PM No comments: