Hockey. We Must be Crazy.

Are you counting down the days yet? We're more than halfway through July.  The summer is flying by and our  kids will be hitting the ice before we know it.  I am enjoying the warmth of the sun, the relaxed pace of summer life and the extra family time.  A homecooked meal with all of us at the dinner table is a rarity during the season. Finding no reason to rush anywhere, you can't help but be amazed at how we fit it all in... school, family events,  homework, cooking, cleaning with practices, games, tournaments and fundraisers, and on and on. We truly are families living on the edge during the hockey season. Our non-hockey friends shake their heads in disbelief when they look at us and our jam-packed calendar during the season. Are you crazy they ask? Maybe we are. There's nothing simple or easy about hockey. But looking back, would you have traded a second of it? Tick tock. 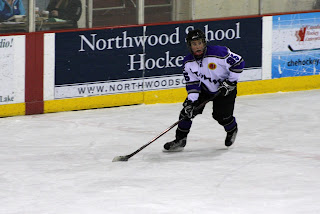 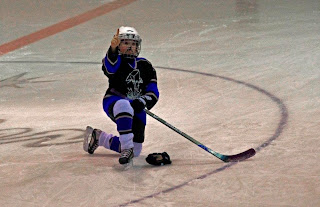 Posted by Syracuse Hockey Mom's Network at 6:21 PM No comments:

Coaches in Your Corner 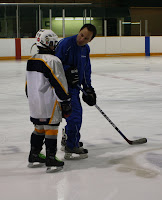 Think back and pick out the people who’ve touched your life. Perhaps your mom tops your list for her words of wisdom, like “this too shall pass,” after being rejected by your first crush. Or maybe it’s your dedicated dad for pushing you in the direction of your dreams and telling you they’ll come true if you have the courage to pursue them. Perhaps it’s that 9th grade English teacher who saw your passion for writing and gave you the key that awakened your inner creative soul. I was fortunate to have all of the above. But, unlike me, my children have had the fortune of some added mentors and motivators in their lives. They’ve had some pretty decent coaches. 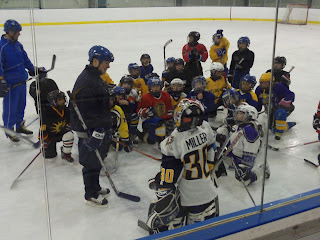 Coaches yell a lot, but they also lead by example. I’ve seen them push their tired, aching bodies to the limit during practices to show the kids the proper stride or the absolute need for speed during drills. After challenging a player to try to score a hat trick or from the blue line, I’ve seen coaches gracefully pay up their bet by making snow angels on the ice, or donning a ballerina tutu in the locker room (not so gracefully). I can’t relate to any of that. The only way I ever got on a team bus, was as scorekeeper.

So I turn to friend and middle school teacher Bill Cahill to delve a little deeper into the profound impact a coach, or coaches can have on a life. School teacher Bill is also a hockey coach, who had the privilege of being coached by some of Oswego’s hockey greats. Among them was Pete Sears. He is an Oswego legend!

Bill writes, “I am proud to say Pete Sears is one of my best friends, the guy you turn to when you have a problem. He was my 7th grade social studies teacher. Around that time, I also started attending his summer off ice workouts. Pete and those workouts ( taken from what the Russians had been doing for years), taught me that your body has no limits, that you can endure more pain than you think you can, and that you can always, always do “one more.” Pete’s biggest point of emphasis was always preparation, mental and physical. He has a list of several hundred “mind vitamins” that we all have committed to memory, but one of his favorites is, “By failing to prepare, you are preparing to fail.” Many of these sayings can be found posted in my classroom today. To Pete, these sayings are not just catchy phrases, but a way of life. He is the least hypocritical person I have ever met. He walks the talk. Undoubtedly, he is also the most honorable man I have ever met.

Pete’s practices, back in the day, were the stuff legends are made of. He felt that if we faced a team that had a higher skill level, that conditioning and guts could level the playing field, and he was right. Even though his practices would push you to what you may be thought were your limit, I don’t remember any of us complaining. We would do anything for this man and we just turned our minds and bodies over to him for the molding. Pete was the coach that if you later joined the military and found yourself alone in a foxhole at night, it would be his teachings of life and toughness that would get you through it. He is also the guy you would want in that foxhole with you. To this day, he is always there for his former players.

So many times when I have had a setback as an adult, I have drawn on my sports experiences and mentors’ advice to get me through it. I am so lucky to have had great coaches, who have helped shape my life into adulthood. I think that’s the main thing, that volunteer coaches of kids’ sports really can shape lives, if parents can back off far enough to let them. I never remember my parents bad mouthing any of my coaches, not even when I was benched or even cut from a team. I owe them a debt of thanks for that.

In today’s world of not keeping score, team rosters posted on line, everybody gets a trophy mentality, I can’t help but think today’s kids are being shortchanged in being prepared for life.

As a parent myself, I understand that parents today are more protective of their kids than ever. However, many parents seem to be concerned with the coach being a “good fit” for their player. It is the player’s job to adapt to a given coach and their expectations, and that is hard for a kid to do if the parents are always doing their own coaching at home. If a season and relationship with a coach is not a great one, that still is a valuable year and one that can be learned from. Those experiences are reflective of life. Every path is not a smooth one. Even though it can be tough for us, letting our kids persevere through tough experiences, is one of the biggest favors we can do for them.

Each hockey player has stories of people who influenced them. As my hero Bobby Orr likes to say, it’s our responsibility to make better citizens through hockey.” 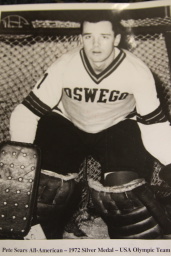 Posted by Syracuse Hockey Mom's Network at 7:22 PM No comments:


As I sit in my car on this gooey evening, in the parking lot next to the lacrosse field watching my daughter's practice, I can't help but smile after listening to the advice the coach shared with the girls tonight. His last lecture was about mental toughness. Tonight's is about mental freshness.  He's advising them that if they had a bad game the night before, missed shots or passes,  they need to erase, erase, erase. To quote his exact words,  "Girls, you need to flush it!"
Good life lesson coach. Emotions can certainly cloud judgement and we shouldn't let emotions get the best of us. As coaches and parents we have an opportunity to help our athletes move beyond the moment, learn from their mistakes and remind them not to carry them around like a bag of luggage.

Posted by Syracuse Hockey Mom's Network at 6:33 PM No comments: