How to Make Tryouts Less Stressful

It's tryout time and it's a trying time for parents and kids. There will be drama. There will be stress. There might be even enough of it to go around for a new reality TV series, slide over Dance Moms, think "HOCKEY MOMS!" But parents should remove themselves from the drama and step into the arena with positive words and actions. As badly as you want them to make the team, remember, it's not about you. And dealing with disappointing you, on top of the disappointment of not making the team. is a lot for a child to handle. So your job is to be upbeat before, during and after evaluations and tryouts. The message should be, do your best, but if you don't make it, you'll find something else, maybe something better. Staying out of the coach's grill and staying out of your kid's head, could just give your hockey player the edge and certainly will take the edge off of tryouts.

What about practice? It's important, but don't push it. Practice only as much as they can handle, because you certainly don't want to burn them out on the sport before the season begins. Make sure you do a thorough equipment check; everything needs to feel right and fit right. For knowing what to expect, and how best to impress, I turned to a well respected local high school hockey coach, whose teams have earned state title championships. Frank Colabufo has been part of the player evaluations and selection process for 25 seasons. Here are his thoughts for players and parents for tryouts.


Knowing How To Make a Team

As a player, you need to have the mindset that it is your job to make the team, not the coach's job to pick you. You need to separate yourself from the rest of the group. If you don't, you risk being "on the bubble" and it may end up bursting at the end of the tryout. Here are a few ways to give yourself the best shot at making a team.

Play fast! Keep your feet moving and play with energy. Be strong in traffic and along the wall.

Win every 1 vs. 1 battle all over the ice. Have a constant work ethic in every drill and on every shift. Get loose pucks first and play with an edge. Be hard to play against. Take it personally and never give up.

PLAY OFF THE PUCK

Be a positive team player. Make your teammates better. Be willing to accept a role. The third line center that won't be happy unless he is on the first power play unit, probably gets cut. Carry your own bag and sticks even if your mom offers to carry them for you. Say "please" and "thank you" when you get a drink from the snack bar after practice. Do the right thing, even when you think nobody is looking. We have won championships with teams that were less talented, but we've never won a championship with teams that lacked character.

If you do make the team, congratulations! But, your work is just beginning. You now have the responsibility to get better every single practice. Do not take your selection for granted, because chances are, the players who were cut are making plans to get better. If you're not picked for the team, try to understand that players develop at different rates and times. As long as you are still being challenged, you will continue to improve. Keep playing and keep having fun! Hockey is a great game. 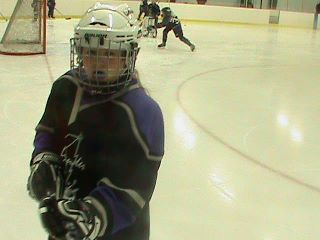 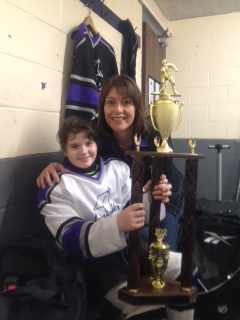 Sophia didn't make the travel team last season,, but what an incredible year on the house team!  Named  MVP during one of the tournaments and back to back tournament wins!  She says it was her best year ever.  It was an awesome year for me too.  And that's what it's all about. 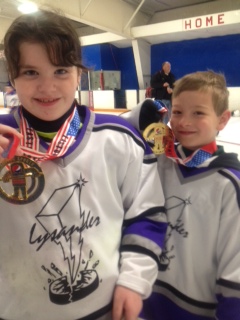 Posted by Syracuse Hockey Mom's Network at 6:07 PM No comments:

Notes For Newbies; Seasoned Advice for Your First Season

I guess you could say I am having some "senior moments." My son is going to be a high school senior.  His last year of hockey.  Wow!  How fast did that happen?  I can vividly recall, really like it was just yesterday, walking into McKies puzzled. overwhelmed,  full of questions about this sport  my 7 year old was determined to play, despite our total lack of knowledge and experience with hockey. I was into figure skating, my husband was a baseball fanatic and trophied soccer player and even pretty decent on the basketball court.   Hockey was never on our radar. Influenced by my sister, who is now a certified hockey coach, and his two cousins, my son Joe insisted on hitting the ice with a stick in his hand.  We agreed to let our children try whatever sport they showed an interest in.  He was lukewarm about everything he tried. Not a real dislike, but no real passion. But there was something about hockey that ignited a spark that we couldn't dim, so we both agreed to take a deep breath and dive into this unknown sports world.

I was truly clueless about everything, from suiting up my kid to the surprise there is no half time in this sport, to knowing how to handle unexpected equipment snafus, like a skate blade snapping in the middle of a heated tournament, to preparing meals ahead of time, and making sure you budget for a very long, very cold season.   So the knee pads, go underneath the socks?  How exactly do they stay up?  Yup, I was about as clueless as you could get. While it was pretty overwhelming that first year. I was fortunate to have a lot of help along the way. Tricks to lacing up the skates with a skate key, to why it is so important to get the wet gear out of the bag as soon as you're home and air it out if you want any chance of keeping the stench down.  Oh, and if you're going to invest in a wheeled hockey bag, make sure you pick them up when you're going across the parking lot.  The salt and chemically treated lots and sidewalks will eat a hole in the bottom of those bags. I found that out the hard way and lost a neck guard somewhere in a New Hartford parking lot.
I think I've almost got it nailed now, 10 years later, and now in the blink of an eye, Joey is entering his final year of hockey.  If I only knew then, what I knew now about this sport.  Grateful I had a lot of seasoned parents our first year, who gave great guidance, especially when it came to equipment, how to save on costs and not get discouraged when the season is filled with losses, chippy kids, and obnoxious parents.  I can honestly say the bright moments far outnumbered the dark ones.  Here are some more hockey parents ready to shed some more light on this sport that is challenging, surprising and incredibly rewarding.


WHAT ADVICE DID YOU GET AS A NEWBIE?

I put the question out there on The Puck Hog Facebook page and here are some great responses.

Erin writes, "  I didn't really get any, I was given a lot of negative comments. I was told it's the most expensive sport, that I'm setting my kids up to play a blood sport, that I'm insane.
But I knew they were full of it! I never regret signing my boys up! There's my advice to the new moms, buy warm clothes and enjoy the games!"

+Dawn ;"Not sure I like Erin every received any good advice more like run or get out now. But I think I would tell new hockey moms to try to relax and enjoy it. You spend way too much time in the sport not too. Your hockey team mates also become your family. You can't always pick them so just do your best to try to enjoy them. I have met so many awesome hockey moms thru the years and gained so many friends that will be with me long after the kids stop playing the sport.
So maybe a new topic should be hockey mom wine club. ; )"

Posted by Syracuse Hockey Mom's Network at 5:11 AM No comments:

It's a debate we've had in our house, and perhaps you too are weighing the pros and cons of a travel team versus a house team for your youth hockey player.  There's a lot to consider, so to help you decide, here's a great explanation from West Genesee Wildcats Head Hockey Coach, Frank Colabufo, regarding the differences between travel teams and house leagues.


Should my child play travel hockey or house league?
That question is as anxiety producing as it is misleading. Let’s take a closer look at what each offers and then try to decide what is best for your young hockey player.
Read more »
Posted by Syracuse Hockey Mom's Network at 8:00 AM 1 comment: