Noah's Day with the Stanley Cup

The Eve of Noah's Big Day!

Noah Delaney, the 10-year-old Fulton boy who won a day with the Stanley Cup, will now enjoy the second part of his prize: attending Game One of the Stanley Cup finals.

Delaney and his mother, Heather Doran, will attend Wednesday’s game at the Prudential Center in Newark, NJ where they will watch Noah’s favorite team, the New Jersey Devils, take on the Los Angeles Kings. Their airfare and hotel expenses are paid for by Discover.

Delaney’s essay about his father serving in Afghanistan and how hockey was a favorite shared experience for them won Discover Card’s “Day with the Cup” contest. He spent May 6 with the Stanley Cup, playing a scrimmage with his hockey team at the Cicero Twin Rinks.

He also celebrated and took photos with the community, friends and soldiers. Discover Card filmed the experience, and will air the documentary during the game.

Noah has credited his local hockey team, the Fulton Red Raider Squirts, for helping him get through the tough transition of his father being away. Sgt. Robert Doran serves with Oswego’s 444th Engineer Company, 411th Engineer Brigade, 412th Theater Engineer Command of the U.S. Army Reserve. 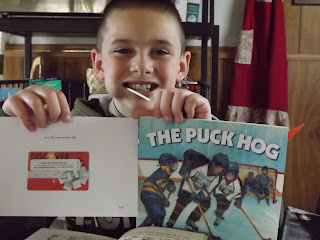 Have fun Noah!  We'll see you on National TV!

Posted by Syracuse Hockey Mom's Network at 2:39 PM No comments:

STAN FISCHLER: Plenty of reasons to cheer for Devils - DailyFreeman.com

STAN FISCHLER: Plenty of reasons to cheer for Devils - DailyFreeman.com 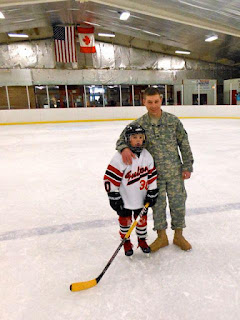 Posted by Syracuse Hockey Mom's Network at 6:10 PM No comments:

A Day with the Stanley Cup 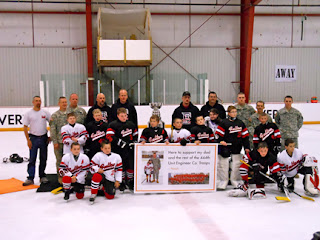 OUR DAY WITH THE CUP
by Todd A. Shear
hockey dad


This past Sunday I got the extreme honor of spending the day with the Stanley Cup, one deserving young man, all of his teammates, friends and family that he chose to share his day with. I felt extremely honored to take part in this special day and to live that special moment with my own son and everyone else that had the honor to be there as well. 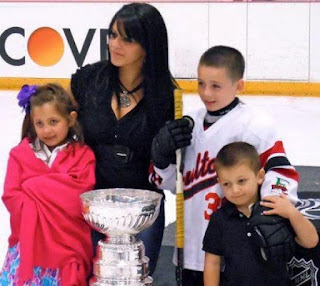 My son's friend and teammate, Noah Delaney, entered a contest and wrote an inspiring story about what spending a day with the Stanley Cup would mean to him. His story was all about his father, who is serving his country overseas, and the bond they have through hockey. Being the father of a hockey player I know that bond very well. My sons love of the game has given me a love of the game that I never knew was there and many joyful hours in a an extremely cold ice rink, yes I said joyful :) watching him practice and play the sport he loves so well. But this day was even more special for everyone involved. To be able to see and touch, yes some got to touch, the holy grail for hockey players and fans: The Stanley Cup, was priceless to witness and take part of. 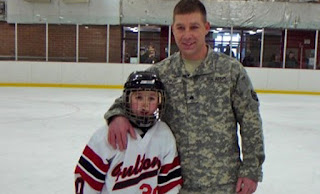 Noah and the entire team had smiles on their faces that couldn't be erased. I overheard more than one of Noahs teammates say that "This is the best day of my life!" The event was extremely well done by Discover Card and everyone involved extremely accomodating and helpful. A top notch event pulled off for all! What an honor. What a priveledge. What a great day and great young man for sharing his special day! This is a day Noah, his teammates and I will never forget! 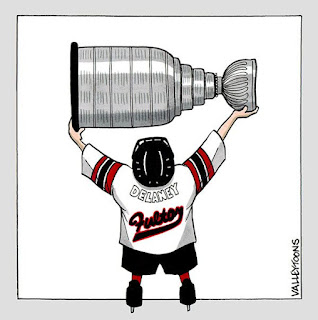 A day with The Cup

From "the hockey blog kid"

Today I spent the day with the Stanley Cup! I was able to see The Stanley Cup, because my friend Noah entered a contest with his amazing essay about wanting to win for his dad and all the soldiers overseas, It was not easy for Noah and his mom when his dad was sent overseas for our country. He got a lot of help from his teammates. His hockey team sounds a lot like mine and I think that's one of the really cool things about hockey kids. We help each other out. Noah won the contest, thanks to Discover card .He won out of 850 people all across the country! Congrats Noah!

This is something I definitely would like to do again. There are a lot of things that I had no idea about the Stanley Cup. So I had the chance to ask the keeper of the Cup. THE keeper of The Cup! How cool is that??!! He told me how every 13 years they take the top of the Cup and put it in the Hockey Hall of Fame in Toronto, Canada . That is so there is more room on the Cup so they can add more names. I was wondering how all those names could fit!

Also they have a name crossed out on the Cup because the person who made it put his father's name on the Cup which he is not allowed.

In this picture Noah and I are standing in front of care packages that are going to be sent to soldiers overseas. I hope Noah's dad gets one so he knows we all are thinking about him and hoping he comes home soon. I hope he'll be home for all of the rest of Noah's hockey seasons!

Phil Pritchard is the Keeper of The Cup!

Check out my new entries coming up!
Sophia Burns
Age 10
- Posted using BlogPress from my iPhone

Posted by Syracuse Hockey Mom's Network at 4:41 PM No comments: