It Takes A Team To Run A Team

We’ve all seen the famous picture of Bobby Orr flying through the air like Superman.

Then just 21 years old, #4 had just slotted home the game-winner in overtime – clinching the Stanley Cup for the Boston Bruins – before tripping over goalie Glenn Hall’s stick and into history.

But here’s a piece of trivia for hockey heads – who set up Orr from behind the net on that score? Or better yet – who twice kept the puck inside the zone on that play, allowing Boston’s attack to continue?

We all remember Bobby Orr, but his iconic moment doesn’t happen without an assist from Derek Sanderson or the hustle of Don Awrey.

While it may not be overtime of the Stanley Cup Final, it’s not a stretch to point out that our own young skater’s moments in the sun don’t happen with an assist here or there, or plenty of hustle behind the scenes.

I'm sure your local team, like our Syracuse Nationals Girls squad, wouldn't run as efficiently without our team parents – booking hotels, coordinating travel, team dinners … and the dreaded fundraising ideas.

Still, there's another team that is integral for all teams to succeed and they're not in it for their kids. In fact, they no longer have kids who play hockey. They're members of the wonderful world of volunteers.

For my son's former coach, it's all about giving back to the game that has given so much to him and his children. After Mike Zandri's children went off to college, he was asked to coach an initiation program. I spotted him on the job one day at the rink and was caught by complete surprise to see an old familiar face among the fresh new faces of the littlest skaters in the rink. Bending down, smiling, expressive and laughing.  Mike Zandri? No, couldn't be I thought. It was in sharp contrast to my memories of an intense Coach at the Bantam level who led intricate practices and was always ready to draw something up on his white board.

"It is very different without my own child, " says Zandri. " I don't have to get anyone home to do homework or chores or anything else. This leaves time to answer parents and coach questions, mostly to share all aspects of the game. Sometimes it's more coaching the coaches than coaching the players."

USA Hockey’s New York State District Coach
in Chief is Chuck Gridley, who wears many hockey hats. In addition to coaching three teams, he’s an instructor for the Coaching Education Program, on the board of several National committees for USA Hockey, and National Disabled Board Representative. His son, who he used to coach, now helps him coach all three teams, including the CNY Flyers Sled Hockey Team. “ It’s been great to have the opportunity to not only coach my son when he was young, but to now be able to work with him as a coach.”

A love of the game and a desire to share that with the next generation of hockey players keeps Gridley in the game, “My involvement with the Coaching Education Program gives me the opportunity to help shape the next generation of coaches, and have a real and lasting impact on the game.” There are plenty of volunteer opportunities, says Gridley, who believes it’s an asset to have experienced coaches and administrators who are not connected to a child on the team. 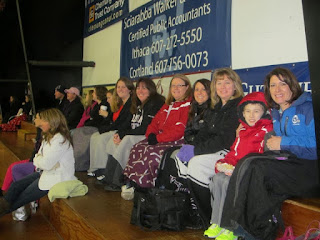 Hockey season can take a lot from us – time, warmth, money, and even our sanity! But if we look at how the game rewards our families with lessons and friends will last a lifetime, it’s easy to see why volunteers are so eager to give back.

After all, once you’ve been through the ringer of being a hockey parent, you know how much everyone can use an assist and some hustle to help the next generation fly.